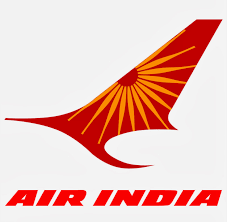 Air India is the flag carrier airline of India headquartered at New Delhi.[8] It is owned by Air India Limited, a government-owned enterprise, and operates a fleet of Airbus and Boeing aircraft serving 94 domestic and international destinations.

Air India is the flag carrier airline of India headquartered at New Delhi. It is owned by Air India Limited, a government-owned enterprise, and operates a fleet of Airbus and Boeing aircraft serving 94 domestic and international destinations. The airline has its hub at Indira Gandhi International Airport, New Delhi, alongside several focus cities across India. Air India is the largest international carrier out of India with an 18.6% market share. Over 60 international destinations are served by Air India across four continents. Additionally, the carrier is the third largest domestic airline in India in terms of passengers carried (after IndiGo and Jet Airways) with a market share of 13.5% as of July 2017. The airline became the 27th member of Star Alliance on 11 July 2014.
The airline was founded by J. R. D. Tata as Tata Airlines in 1932; Tata himself flew its first single-engine de Havilland Puss Moth, carrying air mail from Karachi to Bombay's Juhu aerodrome and later continuing to Madras (currently Chennai). After World War II, it became a public limited company and was renamed as Air India. On 21 February 1960, it took delivery of its first Boeing 707 named Gauri Shankar and became the first Asian airline to induct a jet aircraft in its fleet. In 2000–01, attempts were made to privatise Air India and from 2006 onwards, it suffered losses after its merger with Indian Airlines.
Air India also operates flights to domestic and Asian destinations through its subsidiaries Alliance Air and Air India Express. Air India's mascot is the Maharajah (Emperor) and the logo consists of a flying swan with the wheel of Konark inside it.

Bengaluru: Air Chief Marshal RKS Bhadauria, Chief of the Air Staff undertook his maiden flight in HAL designed and developed Light Advanced Helicopter (LCH) here today. The aircraft took to the skies at 11.45 hours and remained airborne for an hour. The CAS was accompanied by HAL’s Deputy C
Posted Date :  21-10-20

New Delhi: Air India’s northern regional office has formed a committee to identify the ‘redundant’ or ‘surplus’ employees who would be asked to go on a compulsory leave without pay (LWP) for up to five years. An official order in this regard was issued on Tuesday. Air India issued a
Posted Date :  27-07-20

Evacuation Flights Between India And USA

New Delhi: The sale of Air India is expected to be delayed for a second time, with the Centre planning to extend the last date for expression of interest (EoI) from April 30 for the second time to a new date. This comes even as potential bidders are having second thoughts about the airline, t
Posted Date :  22-04-20

Air India to set up internal panel to address privatisation

New Delhi: Air India connects Mumbai with amritsar and London Stansed . CMD Ashwani Lohani inagurated the first-leg AI685 from Mumbai to Amritsar which will proceed to Stansted in few hours as AI165. Shyam Gore, Cabin Supervisor cut the ribbon at the boarding gate of the new flight.
Posted Date :  31-10-19

NEW DELHI. Air India will now provide a meet and assist service named ‘Namaskar’ at the Delhi Airport. With the introduction of Namaskar, Air India added one more service to its extensive range of services. The service will be very useful for those who require any kind of special assistance i
Posted Date :  05-10-19

NEW DELHI. Air India paid tribute to Mahatma Gandhi on his 150th birth anniversary by painting a sketch of him on the tail of an Airbus A320 aircraft at the Indira Gandhi International Airport here.   The approximately 11 feet high by 5 feet image has been painted on the tail of the Airb
Posted Date :  03-10-19

New Delhi: Air India is the flag carrier airline of India, headquartered at New Delhi. It is owned by Air India Limited, a government-owned enterprise, and operates a fleet of Airbus and Boeing aircraft serving 94 domestic and international destinations. The airline has its hub at Indira Gandhi I
Posted Date :  28-09-19

Nagpur: National carrier Air India (AI) is all set to celebrate the World Tourism Day which is on September 27. To celebrate the day, under 'Celebrating India' theme, Air India is decorating its Boeing B-777 with India's World Heritage photos.   Mesmerising pictures of India&
Posted Date :  23-09-19

New Delhi: AAI delegation at India Pavillion is all set to meet airlines & other global airport authorities in the World Routes 2019 at the Adelaide Show Ground. They will present business cases that will influence the establishment of new air services and grow existing routes to India
Posted Date :  21-09-19