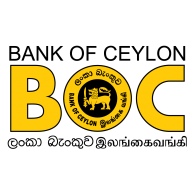 The saga of Bank of Ceylon (BOC) began on 1st of August 1939 under Bank of Ceylon Ordinance No. 53 of 1938, the Governor of Ceylon, Sir Andrew Caldecott, declared open the maiden office of Sri Lanka’s first state-owned commercial bank in Fort, Colombo.

The saga of Bank of Ceylon (BOC) began on 1st of August 1939 under Bank of Ceylon Ordinance No. 53 of 1938, the Governor of Ceylon, Sir Andrew Caldecott, declared open the maiden office of Sri Lanka’s first state-owned commercial bank in Fort, Colombo.
BOC is a licensed commercial bank established under the Banking Act No. 30 of 1988.The registered office is situated at No. 01, BOC Square, Bank of Ceylon Mawatha, Colombo 01, Sri Lanka.
Engaged In
Today having completed more than seven decades of glorious existence, the Bank is firmly entrenched as Sri Lanka’s premier financial services organization offering a broad range of services consists of commercial banking, trade finance, development financing, mortgage financing, lease financing, investment banking, corporate financing, dealing in Government securities, pawn brokering, credit card facilities, off-shore banking, foreign currency operations and other financial services. BOC holds the leadership position in its assets, deposits, and foreign currency remittances.
In Island Map and Beyond
As Bankers to the Nation, BOC reached out to all citizens of the country through its largest network over 627 branches connected online. BOC ATM network over 730 in numbers, serve the people 365 days 24 hours in all 25 districts of the country. The Bank has 13 Subsidiaries and 5 associate companies in its group structure.
BOC diversified its operations in the United kingdom by upgrading its first overseas branch, London branch to a fully fledged bank operating as a subsidiary of BOC named Bank of Ceylon UK Ltd. BOC operates in 03 overseas locations, namely, Maldives,Chennai and Seychelles. 2 ATMs are located in Maldives.
BOC represents the highest worldwide network with over 865 overseas correspondent banks and exchange companies. To serve the migrant communities of the country, we have expanded our services through our representatives at the exchange houses in Qatar, the United Arab Emirates, Kuwait, Bahrain, Oman, the Kingdom of Saudi Arabia, Israel, Jordan, Italy, South Korea, France and Japan.
Ratings and Listings
BOC became the No.1 brand in the country for the ninth consecutive year with a Brand value of Rs.40.5 billion in the year 2017 rated by Brand Finance Lanka. M/s Fitch Ratings Lanka has upgraded BOC’s outlook to positive from stable and simultaneously affirmed its National Long Term rating at AA+ (lka) reflecting Bank’s strong financial profile in terms of capital base, profitability and asset quality and ICRA (lk) awarded AAA rating which is the highest credit quality rating issued by ICRA Lanka. The Bank of Ceylon was named as the Strongest Bank in the country for the year 2015 by the prestigious “The Asian Banker” and it earned global recognition as one of the top 1,000 banks in the world, (Country rank No.1) as listed by “The Banker Magazine” (UK) respectively in 2012, 2013, 2014 and 2015. The Bank of Ceylon won the overall Gold Award at the National Business Excellence Awards (NBEA) Ceremony 2015 with five other “Winner” awards. The Bank claimed its award as the only Sri Lankan brand recognized as one of Asia’s Best Brands in 2013 offered by the Chief Marketing Officer’s Council (CMO Council) based in Mumbai, India.
Governance
In attracting and maintaining public confidence in the institution especially because it is a Government-owned enterprise and the pivotal and dominant role of the Bank in the Sri Lankan economy carrying substantial influence and leadership over many matters of policy and practice, Bank of Ceylon pursues a strategy of being in line with best practices in respect of Corporate Governance. Bank complied with laws and regulations on Corporate Governance as the critical success factor of a sound control environment and improved operational efficiency and enhanced the brand image.
Community
As Sri Lanka’s foremost Commercial and Government Bank, BOC make significant contribution through sustainable financing, philanthropic and social investments whilst building a healthy business for the benefit of all our stakeholders.