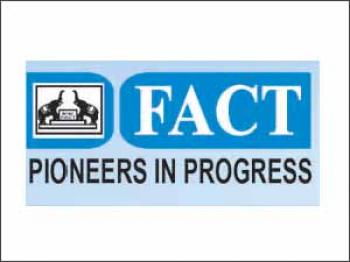 The Fertilisers and Chemicals Travancore Limited or FACT is a fertiliser and chemical manufacturing company headquartered in Kochi, Kerala, India. The company was incorporated in 1943, by Maharajah Sree Chithira Thirunal Balarama Varma.

FACT Engineering Works was established on 13th April 1966 as a unit to fabricate and install equipments for fertiliser plants. Over the years FEW developed capabilities in the fabrication of pressure vessels and heat exchangers. FEW has also undertaken laying of cross country piping and fabrication and installation of large penstocks of hydel projects.

As a diversification plans from the traditional field of Fertilisers and Chemicals, 50000 TPA Caprolactam Plant at Udyogamandal was commissioned in 1990.

New Delhi: A Memorandum of Understanding (MoU) aimed at improving industry institute interaction was signed between The Fertilisers and Chemicals Travancore Limited (FACT) and Government Industrial Training Institute (ITI) Kalamassery . FACT a psu under the Ministry of Chemicals and Fertilizers.
Posted Date :  22-09-20