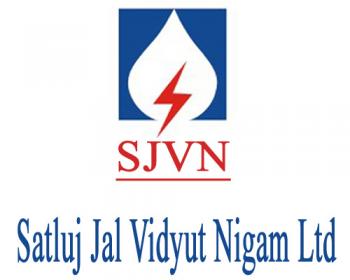 SJVN Limited, a Mini Ratna: Category-I and Schedule –‘A’ CPSE under administrative control of Ministry of Power, Govt. of India, was incorporated on May 24, 1988 as a joint venture of the Government of India (GOI) and the Government of Himachal Pradesh (GOHP).

SJVN has expanded its horizons and envisions developing itself into a fully diversified transnational Power Sector Company in all types of conventional & non-conventional forms of energy and in Power Transmission. The Company, at present, is implementing (under various stages of development) 11 nos. Hydro Power Projects totaling 3,237 MW ( 8 Projects- 1,167 MW in India, 3 Projects of 2,070 MW in neighboring countries of Nepal & Bhutan) and one 1320 MW Thermal Power Project at Buxar in State of Bihar. SJVN has also signed MoU with M/s Saurya Urja Company of Rajasthan Ltd. (SUCRL) on 03.12.15 for allocation of land to develop 300 MW Solar Power Generation capacity in the solar parks of Jodhpur & Jaisalmer. SJVN is a JV partner in Cross Border Transmission Company Ltd. (CPTC) Ltd. with Power Grid, IL&FS, and Nepal Electricity Authority in execution of 86 km long 400 kV double circuit Indo-Nepal Cross Border Power Transmission corridor between Dhalkebar (Nepal) and Muzzafarpur (India). In addition to above , Company is engaged in implementation of 400 kV double circuit associated transmission line of 310 km length for its 900 MW Arun-3 Project in Nepal.

Naitwar Mori HEP (60 MW ) in Uttarakhand and Arun-III HEP (900 MW) in Nepal are in the process of investmentdecision with all clearances in hand while the investment decision for pre-constructions activities and other statutory clearances in respect of rest of survey and investigations projects is also in progress.

SJVN Limited was conferred with the prestigious "Mini Ratna: Category-I" status by the Government of India in the year 2008.

Meeting the criteria laid down by the Department of Public Enterprises, SJVN on qualifying both qualitative and quantitative parameters was upgraded as Schedule 'A' PSU in 2008.

SJVN Profit After Tax Recorded An Increase Of 39 pct

The cheque was presented in the presence of Smt Geeta Kapur

Shimla: As a gesture of goodwill and undertaking an innovative Outreach Program, Shri Nand Lal Sharma, CMD, SJVN Limited, donated mementoes/gifts received by him on various occasions and functions by outside agencies, organizations and groups. These 140 mementoes/gifts were donated to the lesser-
Posted Date :  26-12-19

New Delhi: As a gesture of goodwill and undertaking an innovative Outreach Program, Shri Nand Lal Sharma, CMD, SJVN Limited inaugurated an Exhibition-cum-Outreach Program ‘Sauhardh’ at Shakti Sadan, SJVN Corporate Headquarters, Shimla. All the mementoes showcased during this exhibition will b
Posted Date :  24-12-19

Shimla. SJVN organised a two day Conclave-‘ASCENDANT’ SJVN GEN X Conclave for the senior executives of SJVN at Royal Tulip, Kufri, Shimla. This Conclave is the brain child of the visionary Chairman & Managing Director of SJVN Sh. Nand Lal Sharma.  The aim of this innovative initiative is to
Posted Date :  02-12-19