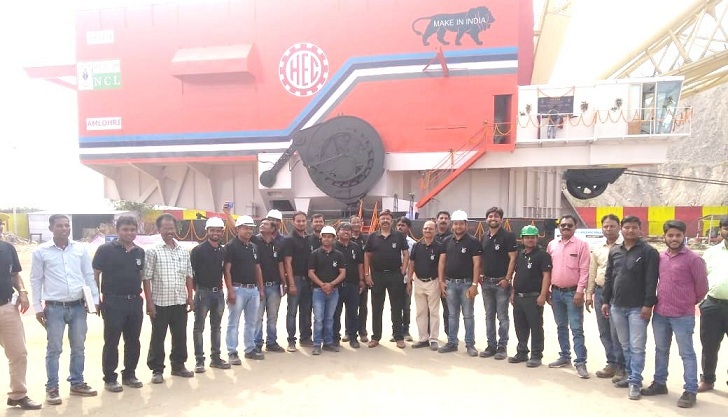 Singrauli: 'Agni' the Walking Dragline 24/88 manufactured at Heavy Engineering Corporation (HEC) was inaugurated at Northern Coalfields Limited (NCL), Amlohri Project today on 28th March 2019.
The machine was inaugurated by Shri A.K.Jha, Chairman, Coal India Ltd. and Shri P.K.Sinha, CMD, NCL. Shri Rana S Chakravarty, Director (Marketing & Production), HEC, along with senior officials were present in the grand inauguration organized by HEC and NCL. Shri Gunadhar Pandey, Director (Technical/Operations), NCL; Shri P.M.Prasad, Director (Technical/Project & Planning), NCL; Shri N.N. Thakur, Director (Finance), NCL, with GMs/NCL, graced the occasion.
Chairman, CIL congratulated Team HEC and Team NCL and highly appreciated the Dragline equipment, which is one of the heaviest earth moving machinery. At present, HEC is one of the four firms in the world which manufacture Draglines. BEML, P&H and Caterpillar are the other manufacturers of Draglines. Chairman, CIL, recalled HEC as one of the Temples of modern India and assured to extend all support to HEC in their endeavours.
HEC has started manufacturing Dragline in 1980s and so far supplied 15 nos. out of which 12 nos. are supplied to NCL. The machine is useful to remove overburden in open cast mines. The first order received from NCL in 1980 and the supplied machine 'Ganga' and 'Yamuna' are still working at NCL collieries serving more than two lac hours.
This machine weighs approx. 2000T and all the mechanical components have been manufactured at HEC (other than hydraulics and electrics). The equipment has been transported to the site in components in 44 nos. of trailers and was erected at the site. It is expected to handle 4.1 million cubic meters of material annually. The value at which the order was secured for each Dragline was Rs 153 Crores.
It was a joyous moment for all the team members of Special Projects Division headed by Shri J. P. Prasad; experts of Dragline equipment, Shri R. Prasad and Shri P. R. K. Sinha to witness the culmination.

3rd meeting of CSR committee of board of PDIL

New Delhi: 257th Meeting of Board of Directors and 3rd Meeting of CSR Committee of Board of Projects & Development India Ltd (PDIL), a Mini Ratna Category-I Engineering-Consultancy PSU under Department of Fertilizers (DOF), Ministry of Chemicals & Fertilizers, Government of India, for FY 2019-20
Posted Date :  24-02-20

CMPDI organized a one day workshop on coal beneficiation