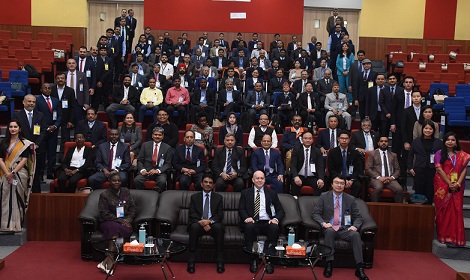 NEW DELHI . AAI is hosting workshop on integration of Airport Collaborative Decision Making (A-CDM) with Air Traffic Flow Management (ATFM) from 2nd to 4th December, 2019. The objective of the workshop is to promote awareness of the concepts of ATFM and ACDM and highlight the ACDM-ATFM integration benefits. Representatives from Asia Pacific, Mid East and African Region States are participating in the workshop.
The workshop commenced in august presence of Shri J.P Alex, ED (ATM), Mr. Shane Sumner, Mr. Punya Raj Shakya & Mr. Hiroyuki Takata Representatives from ICAO, Ms. Keziah Achieng Ogutu, Eastern and Southern African (ESAF) Office and other senior AAI officials at Indian Aviation Academy, New Delhi.
This workshop will provide a platform to share the experiences of all ICAO APAC States in implementation of ACDM and ATFM and discuss implementation related issues. According to provisions contained in the Document ‘Asia/Pacific Seamless ATM Plan ver2.0’, all high-density aerodromes should operate an A-CDM system serving the Major Traffic Flow and busiest city pairs, with priority implementation for the busiest Asia/Pacific aerodromes. As of August 2018, only 15 of the 51 busiest APAC aerodromes reported completion of A-CDM implementation and 17 aerodromes reported a plan for A-CDM implementation.
India has implemented A-CDM in Delhi, Mumbai, Kolkata, Chennai, Ahmedabad and Jaipur airports, of which A-CDMs of Mumbai, Kolkata, Chennai airports have been integrated with ATFM. Integration of Delhi A-CDM is in final stage and of Ahmedabad & Jaipur airports by 2020.