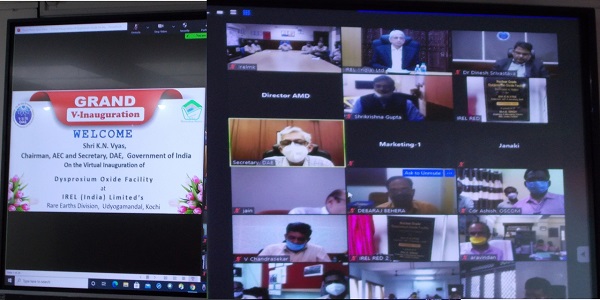 Mumbai: The Dysprosium production facility of IREL (India) Limited was dedicated to the Nation by Shri K. N. Vyas, Chairman, Atomic Energy Commission & Secretary, Department of Atomic Energy (DAE) by virtual mode in commemoration of IREL’s Platinum Jubilee celebrations in the presence of Shri. D. Singh, Chairman, and Managing Director, IREL (India) Limited.
The principal source of Rare Earth Elements (REE) in India is Monazite which is found in association with Six other Atomic Minerals and is commonly known as heavy minerals. Indian Monazite is rich in light Rare Earths and the heavy Rare Earths are found in traces and thus difficult to extract. The content of REE in Indian resources is around 0.05-0.06% out of which the content of Dysprosium is around 0.00009%.
IREL (India) Limited, a CPSE under the Department of Atomic Energy has developed a process flowsheet for extraction of Dysprosium from Monazite in its RED plant in Aluva, Kerala. Dysprosium finds use in nuclear reactors as control rod material, in making permanent magnets to increase its resistance to demagnetization and improved performance in high-temperature applications.
IREL will be in a position to supply other coveted Rare Earths elements to meet the strategic requirements of DAE and the Nation, at large, showcasing its commitment towards achieving self-reliance as part of “Make in India”, “Atma Nirbhar Bharat” for strategic Rare Earths materials.