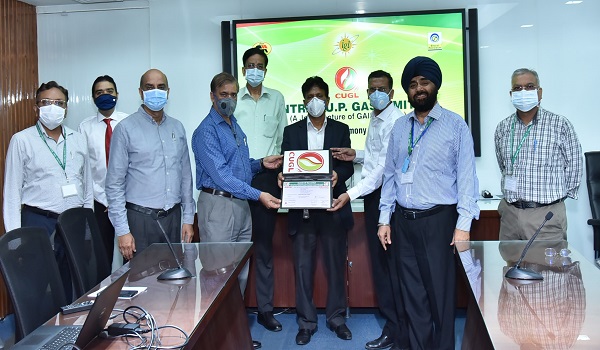 New Delhi: The Central UP Gas Limited (CUGL) presented dividend to Indraprastha Gas Limited (IGL), yesterday for FY2019-20 at IGL Bhawan, New Delhi.
Indraprastha Gas Limited is one of India's leading natural gas distribution companies. IGL supplies natural gas as cooking and vehicular fuel. Established in 1998, the company operates primarily in the Indian state of Delhi.
It is incorporated in 1998 to take over and operate the Delhi City Gas Distribution Project from GAIL for laying a network of gas distribution pipelines in Delhi. The company started as a joint venture between GAIL, Bharat Petroleum, and the Govt of Delhi. Indraprastha Gas is the parent organization of the Central UP Gas Limited.
The current chairman of IGL is Shri. P.K.Gupta, Shri A K Jana (Managing Director), Shri Amit Garg, (Director, Commercial). Central UP Gas Limited is a joint venture between India's two Navratna companies, GAIL (India) Limited and Bharat Petroleum Corporation Limited.