Rajnath Singh has exhorted the Non-Official Directors (NODs) of Defence Public Sector Undertakings (DPSUs) to ensure smooth implementation of various initiatives taken by the Government towards achieving ‘Aatmanirbharta in Defence’. 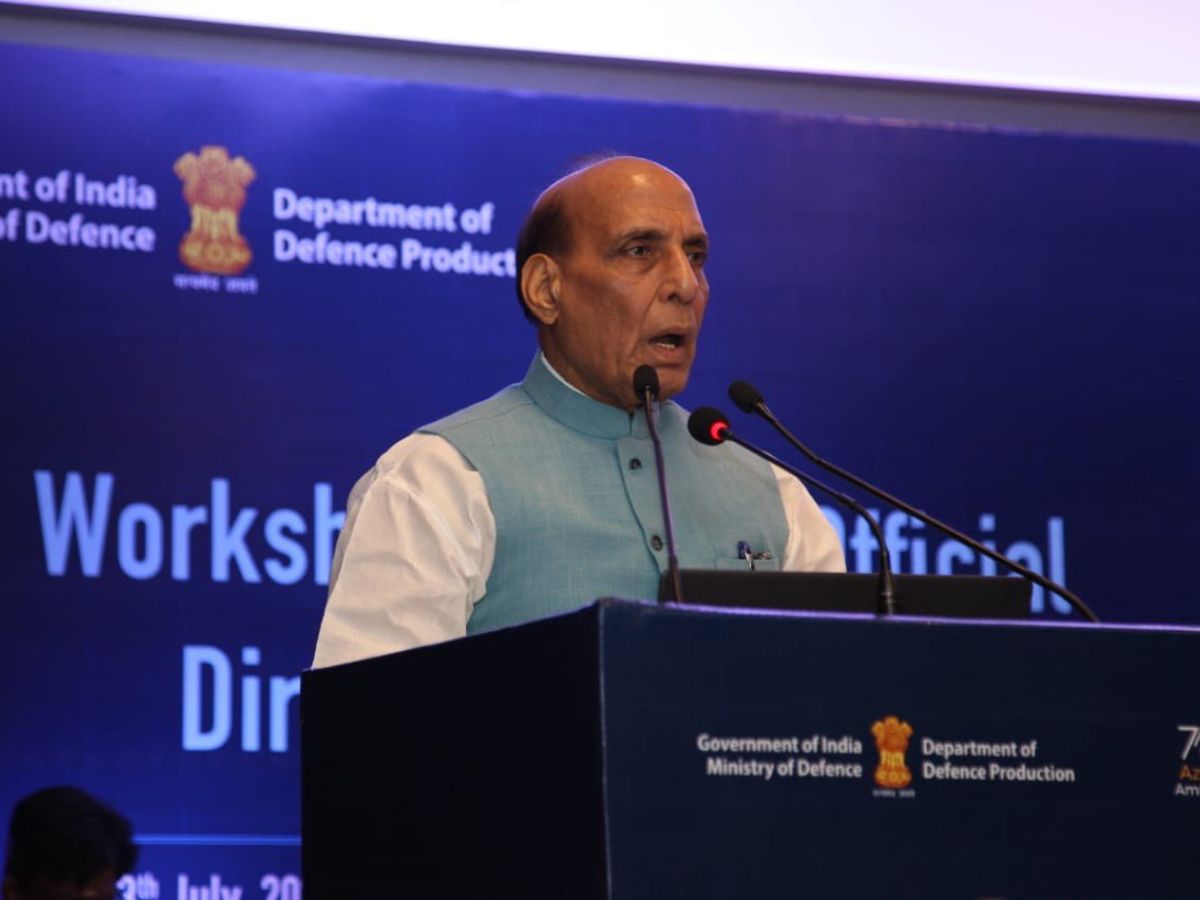 He was addressing the CMDs and NODs of DPSUs during first-of-its kind workshop organised by Department of Defence Production in New Delhi on July 13, 2022. Shri Rajnath Singh asserted that the country is witnessing a transitional phase towards self-reliance and active & collective efforts are central to realise Prime Minister Shri Narendra Modi’s vision of ‘Aatmanirbhar Bharat’.

Shri Rajnath Singh listed out various initiatives taken by MoD to achieve self-reliance, including simplification of acquisition process of defence equipment/platforms under Defence Acquisition Procedure 2020; flexibility in Offset guidelines; increase in FDI limit to 74% under Automatic Route and up to 100% under government route; simplification of process of obtaining license; launch of Innovations for Defence Excellence (iDEX) initiative and enhanced use of Artificial Intelligence in the defence sector.

He added that MoD has set a target of Rs 1.75 lakh crore of defence production by 2025, which includes export of Rs 35,000 crore. He exuded confidence that the DPSUs will play a major role in achieving this goal with a contribution of 70-80 per cent, urging CMDs & NODs to work hand-in-hand to ensure that these public sector companies find place among world’s best in different fields.

The Raksha Mantri described NODs as a bridge between DPSUs and MoD, which not only strengthens corporate governance in public sector companies, but also ensures that the work is carried out as per the policies of the Government. Identifying freedom in giving suggestions as their biggest strength, he called upon the NODs to scrutinise the performance of the management according to the objectives of the government; make value addition to the decision making through positive inputs & constructive criticism and protect the interests of the DPSUs, the Government and above all the nation.

Shri Rajnath Singh termed NODs as vigil keepers who keep a close watch on the strategy, performance, risk management, resources, key appointments, CSR, sustainable development and standards of conduct of DPSUs. He highlighted the valuable contribution of NODs in helping the DPSUs reach their goals, urging them to introduce best practices prevalent in the private sector and share insights & guidance in policy making.

The NODs must encourage the DPSUs for greater R&D and motivate them for sensible risks, he added. Lauding the DPSUs for their outstanding performance in recent years, the Raksha Mantri called upon the CMDs to take appropriate action on the suggestions of NODs.

In his closing remarks, Raksha Rajya Mantri Shri Ajay Bhatt called upon the CMDs of DPSUs to tap the potential of NODs who possess a proper balance of skills, experience, freedom and knowledge of the private sector. He pointed out that the NODs can promote the principles of corporate governance and enhance the credibility & accountability of DPSUs, thereby improving their efficiency. He urged the NODs to strike a balance between the interests of the management & shareholders and contribute in decision making.

Throwing light on the roles and responsibilities of NODs, Defence Secretary Dr Ajay Kumar urged them to provide a thrust to the efforts of DPSUs towards self-reliance. He called upon them to provide valuable suggestions to develop indigenous state-of-the-art technologies/equipment for the Armed Forces and increase exports, with focus on enhancing collaboration with the industry, academia & start-ups. He emphasised on the need for active involvement of NODs to make the DPSUs globally competitive. He called for formulating a roadmap that can place 20 Indian defence manufacturing companies among the world’s top 100 defence enterprises by 2047.

The aim of the workshop was to sensitise the NODs about their role and responsibilities and help them to improve the performance of DPSUs. The NODs play a significant role in the Board of Central Public Sector Enterprises. They help in bringing an independent judgement, bring an objective view in the evaluation of the performance of Board & Management; facilitate quality standards for products and services of the company; balance the interests of the stakeholders and encourage in adopting green technologies and resource conservation practices by the company.