“All enterprises, MNCs and India Inc., big, medium and small enterprises, are facing a reset exercise in doing business. We will have to make sure that policies are right to make India an attractive investment destination” 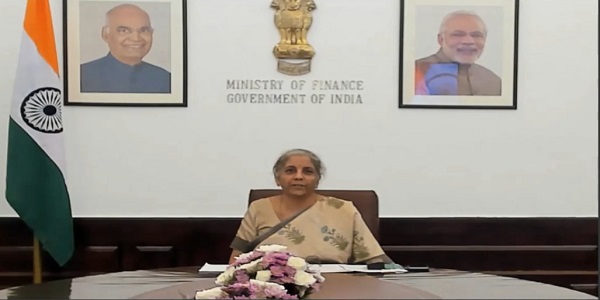 Smt Nirmala Sitharaman, Finance Minister (PSU Connect)
New Delhi: In the present pandemic times when the headwinds to growth have exacerbated, the reforms momentum has continued, and will continue in the future as well, said Union Minister of Finance and Corporate Affairs, Smt. Nirmala Sitharaman while addressing the National MNCs Conference 2020 organised by the Confederation of Indian Industry (CII) here today.
Several measures are being taken up to keep the reforms impetus intact such as professionalisation of the financial sector and thrust on disinvestments. “All enterprises, MNCs and India Inc., big, medium and small enterprises, are facing a reset exercise in doing business. We will have to make sure that policies are right to make India an attractive investment destination,” Smt Sitharaman underlined.
The reforms announced by the government under the ambit of the Aatmanirbhar Bharat Package have opened up many sectors including niche sectors such as Nuclear Energy and Space for the foreign investors to partake in. Moreover, it needs to be kept in mind that the underlying tenet of the marquee package is not about excluding India from the globe, but making it an integral part of the global value chains by improving its domestic competitiveness, highlighted the Finance Minister.
The Government has been working assiduously towards ensuring a facilitative environment for the MNCs operating out of India, Smt. Sitharaman stated.
Hon’ble Prime Minister Shri Narendra Modi himself has been interacting with MNCs regarding their concerns. Enthused by the Government’s thrust on reforms and reduced taxation rates, several Sovereign Funds have expressed interest in partnering with the Government on its National Infrastructure Pipeline.
In furtherance of its reforms agenda, the Government is ensuring the setting up of dedicated Special Manufacturing Zones for the production of Pharma, Medical Devices and APIs in 6 States. Effective unified single window mechanism is part of these zones.
The Finance Minister concluded that Hon’ble Prime Minister has not lost the opportunity for deep reforms, even during the coronavirus crisis and the reforms momentum would continue.
Mr Soumitra Bhattacharya, Chairman, CII National Committee on MNCs, in his opening remarks stated that MNCs acknowledge the fast-paced reforms that have become a regular feature of the current economic environment. The reforms must continue given the tectonic shifts in global supply chains in a post-COVID world, which are attracting many foreign firms to shift their base to India. This opportunity must be seized fully, he further added.
Mr Chandrajit Banerjee, Director General, CII earlier in his welcome remarks highlighted that the Government has been working rigorously to create a strong, vigorous, and dynamic environment for MNCs by introducing a plethora of reforms. He suggested that slab-based incentives could be offered, depending on size of FDI. “CII remains committed to continue supporting the government in making India an even more attractive destination for foreign investors”, he added.