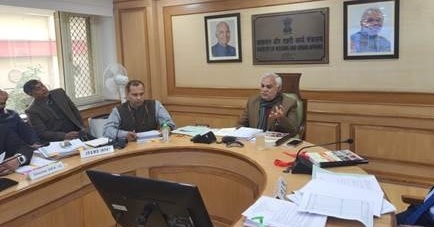 At the CSMC meeting, approval for construction of Demonstration Housing Projects (DHPs) at Dimapur in Nagaland and Kot Bhalwal in Jammu was also accorded. Both the projects will be built using new/alternate technologies under the Technology Sub-Mission component of PMAY-U. DHPs are model housing projects that showcase the field-level application of the technology and are also used as a platform to impart on-site orientation, training to practitioners and students in the housing sector. So far, six DHPs have been completed and four are being constructed in different parts of the country.

The upcoming DHP in Dimapur will be used as a working women’s hostel while the one in Kot Bhawal will serve as a sports hostel on a rental basis with other infrastructure facilities and provisions.

The CSMC also approved a proposal for incubation support under ASHA-India for a low-cost Bamboo Housing Project submitted by IIT Kharagpur.

Total number of sanctioned houses under the Mission is now 1.14 crore; of which around 91 lakh have been grounded for construction and more than 53 lakh have been completed and delivered to the beneficiaries. The total investment under the Mission is Rs 7.52 lakh crore, with Central Assistance of Rs 1.85 lakh crore. So far, Central Assistance amounting to Rs 1.14 lakh crore has already been released.

On this occasion, a Compendium on Indigenous Innovative Building Materials and Construction Technologies was also released. It provides details about 84 technologies showcased during Indian Housing Technology Mela (IHTM) in Lucknow from 5th to 7th October 2021.  It will serve as a useful resource for the dissemination of technologies for field-level application, replication across the country. The compendium will help policymakers, public/private construction agencies, other stakeholders to select and adopt materials, technologies in future housing projects.