The inputs of industry go a long way in effecting policy modulation and changes. With the signing of MoU with SIDM, the Indian Army has reiterated its firm resolve towards achieving self-reliance by supporting and handholding the indigenous Defence industry. 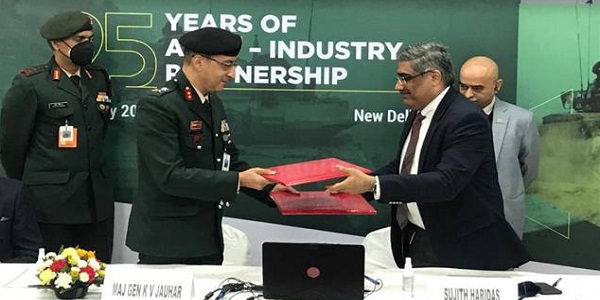 New Delhi: An MoU between the Indian Army & the Society of Indian Defence Manufacturers (SIDM) was signed on 21 January 2021 to provide further impetus to indigenization under the Hon’ble Prime Minister’s vision of ‘Atmanirbhar Bharat’ and to achieve strategic independence by reducing dependence on foreign origin equipment. This MoU was signed on the occasion of 25 Years of Army-Industry partnership with the Confederation of Indian Industry (CII). Collaboration between the Indian Army and industry started in 1995 with the indigenization of spares and has progressed to major Defence platforms and a wide range of weapons and equipment.

Increasing security challenges due to India's rising stature in the international community, apart from unresolved borders and revisionist adversaries require continuous and concerted capability building of the Army through modernization to address them. This can be done by equipping the Army with indigenously built equipment. In order to optimize capability building and single contact with the industry, the Indian Army has reorganized itself by aligning both the revenue and capital routes of procurement under Deputy Chief of Army Staff (Capability Development & Sustenance). Army Design Bureau (ADB) has been established to act as a direct facilitator with the industry and thereby connect the Defence manufacturers directly with the user. These changes have resulted in a collaborative engagement between the technology provider, the equipment manufacturer, and the user.

The Government has made necessary policy changes to support indigenization and achieving self-reliance in the Defence sector with the active support from the Army. Industry associations have provided a common platform for the industry to interact with the Indian Army to showcase their expertise. The inputs of industry go a long way in effecting policy modulation and changes. With the signing of MoU with SIDM, the Indian Army has reiterated its firm resolve towards achieving self-reliance by supporting and handholding the indigenous Defence industry.

Mangalore: Schedule ‘A’-Mini Ratna, CPSE, Central Warehousing Corporation, and NMPT signed an initial Memorandum of Understanding on Feb 24, 21 at Mangalore in the presence of The Deputy Chief Minister who is also Minister for Higher Education, Information Technology and Biotechnology, S
Posted Date :  26-02-21

New Delhi: Balmer Lawrie signed the Mou with IIM Calcutta Innovation Park today for the Round 2 Startup Fund program with the objective of creating a vibrant ecosystem aimed at fostering entrepreneurship and promoting innovation.  About Balmer Lawrie Balmer Lawrie has grown enormously in
Posted Date :  24-02-21

New Delhi: Cochin Shipyard has signed MoUs with Dredging Corporation of India (DCI) and IHC Holand BV to make world-class dredgers. The MoUs were signed in the presence of Minister Mansukh Mandaviya Minister of State (I/C) for Ports, Shipping, and Waterways in Delhi on Wednesday.  Mr. Marten
Posted Date :  24-02-21

New Delhi: The Government of India and the Asian Infrastructure Investment Bank (AIIB) today signed a loan agreement for a $304 million Assam Intra-State Transmission System Enhancement Project to improve reliability, capacity and security of the power transmission network in the State of Assam.
Posted Date :  23-02-21

New Delhi: The Government of India, Government of Nagaland, and the World Bank today signed a $68 million project to enhance the governance of schools across Nagaland as well as to improve teaching practices and learning environments in select schools. The “Nagaland: Enhancing Classroo
Posted Date :  23-02-21

New Delhi: Northern Coalfields Limited (NCL), a Miniratna company of the Government of India, catering to the energy needs of the country, as well as adding villages under social corporate responsibility in the nearby areas, all literate, all healthy, clean water, skills, base, and sports wave like
Posted Date :  12-02-21

Ministry of Defence and BEL signed contract worth Rs 1,000

New Delhi: Central Mine Planning & Design Institute (CMPDI) has signed a Memorandum of Understanding (MoU) with the Department of Mines & Geology (DMG), Govt. of Jharkhand for exploration and allied activities for non-coal minerals in Jharkhand.  This MoU is valid for a period of thr
Posted Date :  08-02-21

New Delhi: DRDO today signed a Memorandum of Understanding (MoU) with the Indian Institute of Science (IISc) Bengaluru for the creation of JATP–Center of Excellence (JATP – CoE) in the premises of IISc to expand the scope and objective of the existing Joint Advanced Technology Program. D
Posted Date :  08-02-21

Bengaluru: Navratna Defence PSU Bharat Electronics Limited (BEL) and BPL Medical Technologies Pvt Ltd entered into an MoU at Aero India 2021, Bengaluru. The MoU signed for the co-operation in the field of medical products and solutions to provide affordable health care for the country and also to le
Posted Date :  08-02-21

Bengaluru: Garden Reach Shipbuilders & Engineers Ltd. signed strategic MoUs as part of the ‘BANDHAN’ initiative at Aero India 2021, Bengaluru, that will help the shipyard boost its Shipbuilding and Ship Repair capabilities and identify and explore synergies and partnerships for the n
Posted Date :  06-02-21