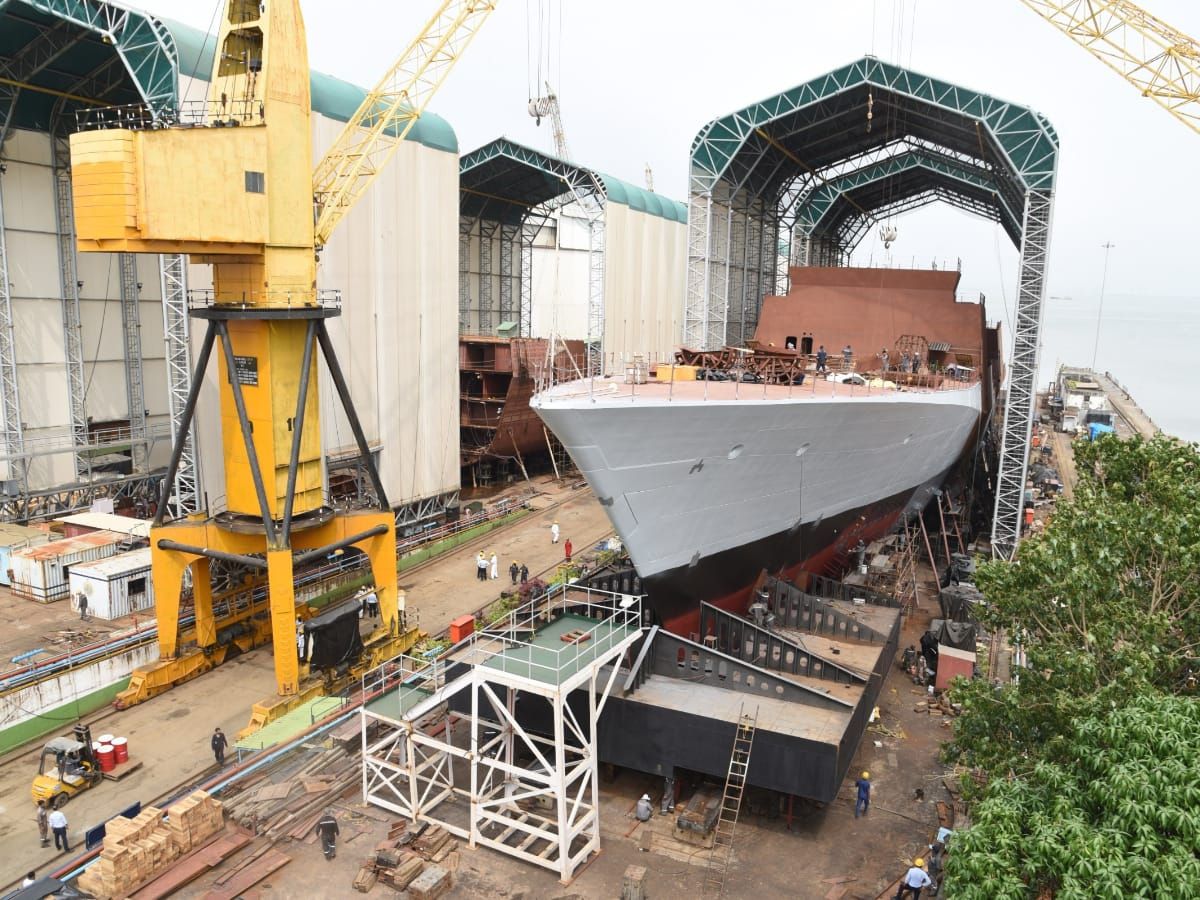 New Delhi: The first quarter for Mazagon Dock Shipbuilders Ltd (MDL) kick started with the launch of two frontline warships namely Udaygiri- the second Stealth Frigate of Nilgiri Class and Surat- the fourth Missile Destroyer of Visakhapatnam class. The second quarter will be marked by the launching of the third ship of Project 17A ‘Taragiri.

This will mark yet another major milestone for MDL in the current financial year. Yard 12653, Taragiri is scheduled to be launched on 11 Sep 2022.

This ship has been built using Integrated construction methodology which involves hull blocks construction in different geographical locations and integration/erection on Slipway at MDL. The keel of Taragiri was laid on 10 Sep 2020 and is expected to be delivered by August 2025. The vessel will be launched with a launch weight of approximately 3510 Tons. The ship is designed by the Indian Navy’s in-house design organization viz. Bureau of Naval Design. MDL is carrying out the detailed design & construction which is overseen by Warship Overseeing Team (Mumbai).

The 149.02 M long & 17.8 M wide ship, propelled by a CODOG combination of two Gas Turbines and 02 Main Diesel Engines which are designed to achieve a speed of over 28 knots at a displacement of approx. 6670 Tons. The steel used in Hull construction of P17A frigates is indigenously developed DMR 249A which is a low carbon micro alloy grade steel manufactured by SAIL. This indigenously designed stealth Frigate will have state-of-the-art weapons, sensors, an advanced action information system, an integrated platform management system, world class modular living spaces, sophisticated power distribution system and a host of other advanced features.

It will be fitted with supersonic surface-to-surface missile system. The ship’s air defence capability, designed to counter the threat of enemy aircraft and anti-ship cruise missiles will revolve around the vertical launch and long range surface to air missile system. Two 30 mm rapid-fire guns will provide the ship with close-in-defence capability while an SRGM Gun will enable her to provide effective naval gunfire support. Indigenously developed triple tube light weight torpedo launchers and rocket launchers will add punch to the ship’s anti-submarine capability.

The indigenous content in P17A frigate is approx. 75% which is a notch above its predecessors P17 Shivalik class Ships. The ship will be integrated with large number of indigenous equipment and machinery sourced from major industrial houses in the country as well as over 100 MSMEs. Indigenization efforts received a renewed thrust with the ‘Make in India ‘policy, of the Government leading to development of ancillary industries along with generation of employment opportunities both locally as well as pan India and thereby strengthening the economy.

With this launch we are reiterating our firm commitment to the continued development of our indigenous warship-building capability. The fact that this ship is designed and is being constructed in India amply encapsulates our commitment to indigenization in our quest for strategic autonomy, an imperative for any national power of relevance.

The Shipyard had modernized its infrastructure and facility for undertaking Integrated Construction and have also implemented several technology components of Industry 4.0 notably, the Product Data Management (PDM) / Product Lifecycle Management (PLM), Virtual Reality Lab (VRL) and Augmented Reality for inspections. With these enablement, MDL presently has an aggregate capacity to build 10 Capital Warships and 11 Submarines simultaneously.