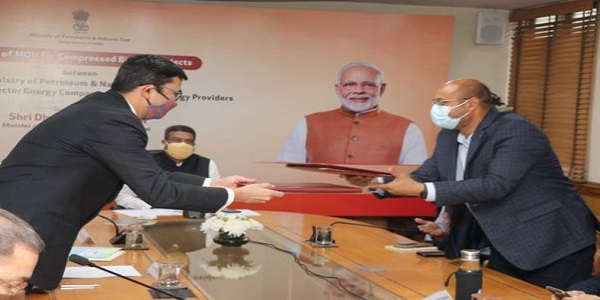 New Delhi: MoU was signed today between MoPNG and leading oil & gas marketing companies & technology providers to establish Compressed Bio-Gas CBG) plants across India under the Sustainable Alternative Towards Affordable Transportation (SATAT) initiative, in the presence of Union Minister of Petroleum and Natural Gas & Steel Shri Dharmendra Pradhan to boost the availability of affordable and clean transport fuels
MoUs were signed with energy companies viz. JBM Group, Adani Gas, Torrent Gas, and Petronet LNG for setting up of Compressed Bio-Gas (CBG) plants, and with technology providers in CBG sectors IndianOil, Praj Industries, CEID Consultants & Bharat Biogas Energy for facilitating the availability of technology for the projects.
The government of India, under the SATAT initiatives, envisages setting up of 5000 CBG plants by 2023-24 with a production target of 15 MMT, facilitating the creation of new employment opportunities and enhancing farmers' income towards further invigorating the rural economy.
Speaking about SATAT, Shri Pradhan said, “We have developed a clear-cut roadmap for SATAT. I am glad to note that Indian industry players have shown immense interest in SATAT. Letter of intent for 600 CBG plants have already been given and with today’s signing of MoUs for 900 plants, a total of 1500 CBG plants are at various stages of execution. Rs 30,000 Cr of investment is envisaged in these 900 plants. A total of 5000 CBG plants with an approximate investment of Rs. 2 lakh crores are envisaged. Biofuels have the potential to reduce our fuel import bill by Rs. 1 lakh crore.”
Elucidating the benefits of SATAT, Minister Pradhan said, “Benefits out of the SATAT will go to our farmers, rural areas, and tribals. With the inclusion of forest waste, Agri-waste, animal husbandry waste, and marine waste, SATAT involves a multi-pronged approach. With a liberalized policy regime ensuring ease of doing business for entrepreneurs, off-take guarantee, financing, and technology support, SATAT is all set to contribute towards doubling farmer’s income, generating employment for the youth, and ensuring clean energy for sustainable development.
The Minister also thanked the Reserve Bank of India for including CBG in the priority sector lending framework.
SATAT (Sustainable Alternative Towards Affordable Transportation) initiative for boosting production and availability of CBG as an alternative and affordable clean fuel for the transportation sector was launched by the Government of India on 1.10.2018. The scheme envisages setting up of 5000 CBG plants by FY 2023-24. The signing of the MoUs will give a big fillip to the clean energy initiative of the Government.
Over the last two years, SATAT has grown into one of the flagship programs of MoPNG. SATAT will establish an ecosystem for the production of Compressed Bio-Gas from various waste and biomass sources in the country leading to multiple benefits viz. reduction of natural gas import, reduction of GHG emission, reduction in burning of agriculture residues, remunerative income to farmers, employment generation, effective waste management, etc. The initiative is in line with the goals of AatmaNirbhar Bharat, Swachh Bharat Mission, and boosting the MSME sector.
Secretary, MoPNG, Shri Tarun Kapoor sharing his insights, termed this as a remarkable achievement, as the infusion of big companies in the CBG sector will provide the sector with much-sought guidance and technical expertise towards the success of SATAT.
MOU Signing ceremony marks MoPNG's commitment towards SATAT and the increased participation of the private sector would help the nation in achieving indigenous and sustainable production of clean fuel. SATAT initiative is also an important step towards the fulfillment of India’s COP-21 commitments for carbon emission reduction. Shri Pradhan, in his address, affirmed that the completion of 5000 CBG plants will facilitate lowering greenhouse gas emissions, remunerating farmers for agricultural residues, and reducing natural gas imports, in line with the Aatmanirbhar Bharat and Swacch Bharat missions.

New Delhi: The Union Cabinet, chaired by Prime Minister Shri Narendra Modi was apprised of the signing of Memorandum of Understanding(MoU) between India and Uzbekistan for cooperation in the field of Solar Energy. The main area of work under is to identify research/demonstration/pilot projects be
Posted Date :  20-01-21

Ministry of Highways notify rules of MOUs with neighbour countries

Ministry of Electronics and IT signed MoU with Amazon Web series

New Delhi: RINL- Vizag Steel entered into MOU with M/s Bridge & Roof on 16th January 2021 towards Project Management Consultancy from concept to commission for execution of miscellaneous civil, structural, electrical, and Mechanical engineering works of RINL. The MoU was signed and exchanged by
Posted Date :  16-01-21

New Delhi: Indian Oil Corporation Ltd. and Phinergy signed an MoU to collaborate in new clean energy technologies during the visit of Hon. PM Shri Narendra Modi to Israel in July 2017, and this e-mobility product developed for Mahindra Electric, is a result of the ongoing implementation of the MoU s
Posted Date :  14-01-21

New Delhi: NHPC Limited, India’s premier hydropower company and a PSU under the Ministry of Power has signed a Definitive Agreement on January 13, 2021, for implementation of the Approved Resolution Plan for takeover of 120 MW Rangit-IV HE Project of Jalpower Corporation Limited (JPCL) in Sikk
Posted Date :  14-01-21

New Delhi: State Bank of India has signed an MOU with Mahindra Lifespace, one of the premium real estate companies. This joint venture will focus on collaborative marketing activities for promoting Home Loans and driving Home sales in SBI approved projects of Mahindra Lifespaces. About Mahindra
Posted Date :  13-01-21

New Delhi: The Union Cabinet, chaired by the Prime Minister, Shri Narendra Modi, has given its approval to the Memorandum of Understanding (MoU) on Scientific and Technical Cooperation between the National Centre of Meteorology (NCM), United Arab Emirates (UAE), and Ministry of Earth Sciences (MoES)
Posted Date :  13-01-21

New Delhi: Indian Renewable Energy Development Agency Ltd. (IREDA), under the administrative control of Ministry of New & Renewable Energy (MNRE), today signed a Memorandum of Understanding (MoU) with NHPC Ltd., the PSU under the Ministry of Power, for providing its technical expertise in develo
Posted Date :  09-01-21