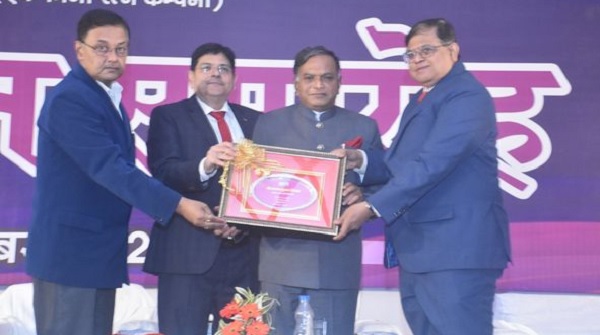 Specially sharing the memories of his tenure of NCL and MCL as CMD in the program, he said that 'Hum Log Hamari Shakti' has been my motto. I have been a part of the Coal India family. He also discussed his personal life. He said that life was full of ups and downs. He expressed his gratitude for the immense love, affection, cooperation and respect received in NCL and said that he is overwhelmed for it.

He said that with your cooperation and respect, both the companies (NCL and MCL) were able to make it to the top. Team NCL and MCL also made complex times easier. CMD got emotional while speaking. He also recalled his various experiences in the coal industry.
In the function, the Board of Directors of NCL and MCL, JCC members, and other senior officers highlighted their memory and personality associated with CMD Shri PK Sinha.

After completing his BE (Mining) from Raipur Engineering College in 1982, Shri Sinha started his service as a JET in Coal India Limited. His first appointment was in the underground mine of SECL.

He has worked in SECL, CMPDIL, WCL, NCL, and MCL in his long career. With effect from 22nd December 2017 in Shri PK Sinha, NCL has made extraordinary achievements. The company has undergone radical changes in the processes at various levels, increasing from 84.09 MT in the year 2017 to more than 115 MT in the year 20-2021.

Under his leadership, work has been done in the company on infrastructure, employee welfare, advanced technology in coal mining process, quality of coal, financial benefits to the company, sustainable and green mining and various levels.