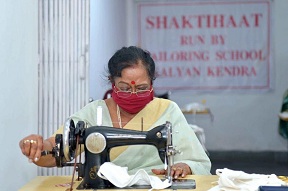 Dandi: Prime Minister Shri Narendra Modi dedicated the National Salt Satyagraha Memorial at Dandi in Navsari district, Gujarat to the nation today on Mahatma Gandhi’s death anniversary.
At the memorial site, he also unveiled statues of Mahatma Gandhi and 80 Satyagrahis who had marched with him during the historic Dandi Salt March in 1930 to make salt from seawater against the British law. The memorial also has 24-narrative murals depicting various events and stories from the historic 1930 Salt March. Solar trees are installed to meet the energy requirements of the memorial complex. The PM took a round through the memorial.
Addressing a public meeting, the PM congratulated everyone who has worked for the memorial. PM said, 'this memorial reminds us of the great sacrifices of the people of our country for the cause of freedom'. The PM added, the Dandi memorial encapsulates the ideals of Mahatma Gandhi-  Agrah for Swadeshi, Swatchagrah and Satyagraha and it will be a major attraction for the tourists in the coming days. PIB