The shipyard is now capable of producing 20 warships simultaneously and is ably poised to meet the future warship requirements of Indian Navy and Indian Coast Guard’s Next Generation Corvettes, Frigates and Patrol Vessels. 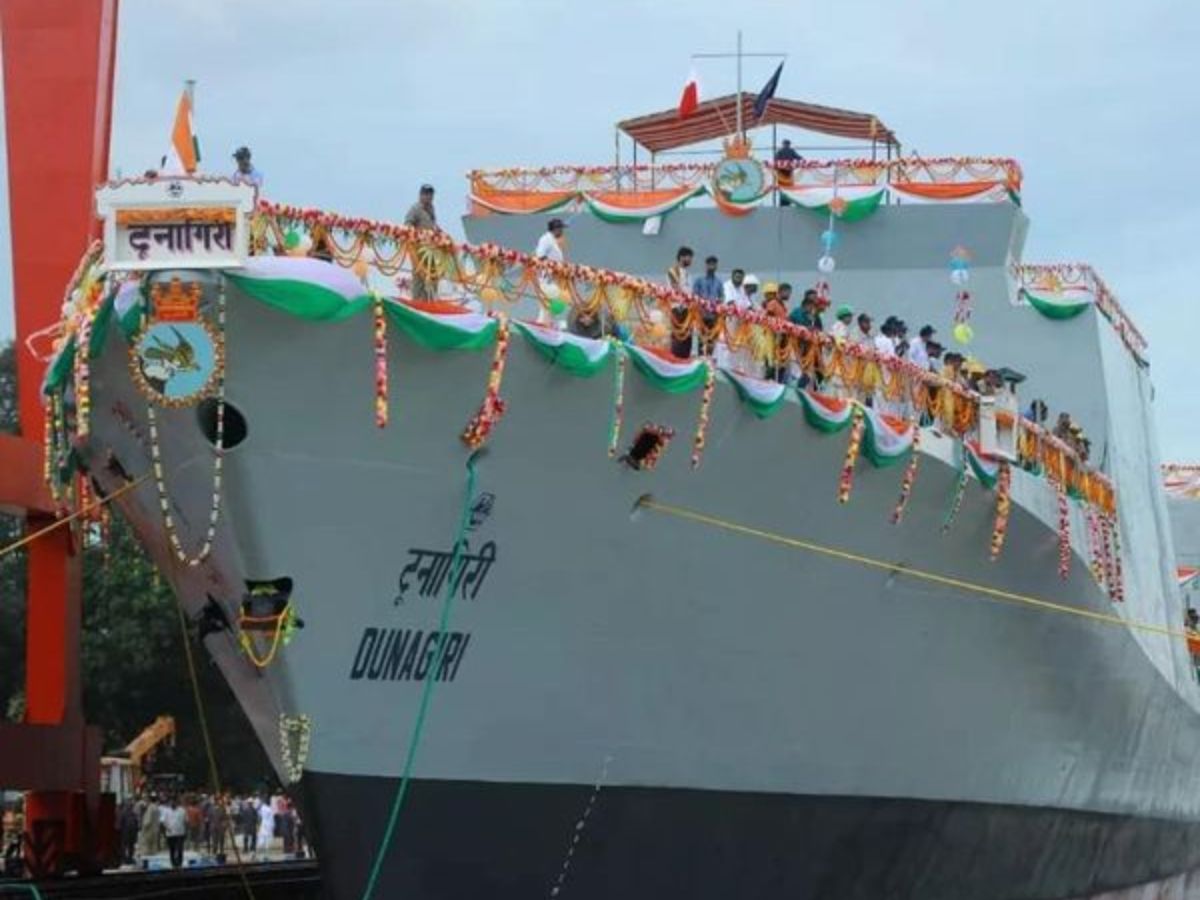 Kolkata: Garden Reach Shipbuilders and Engineers Ltd (GRSE) accomplished a key milestone in the prestigious Project 17A today, with the launch of "Dunagiri" (Yard 3023) the second of GRSE’s three Advanced Frigates, by Shri Rajnath Singh, Hon'ble Minister of Defence, Government of India, the Chief Guest on the occasion.

The Launch symbolises the ship's birth as she makes her first contact with water. The ceremony was conducted in true maritime Indian traditions with the application of vermillion, breaking of coconut on the ship's bow and chanting of Vedic mantras followed by the ship being floated out of her building dock.

With a value of around rupees nineteen thousand two hundred crores (Rs.19200+ crores) the contract for building three Frigates under Project 17A is the largest order ever won by GRSE. The first ship of the series, “INS Himgiri” was launched in 14 Dec 20, and is presently undergoing the ‘outfitting’ phase.

With a length of 149 metres, a displacement of over 6670 T, and a cutting-edge CODOG Propulsion system that allows for speeds of over 28 knots, P17A ships will be the most modern, cutting-edge Guided Missile Frigates in the Indian Navy’s fleet. These sophisticated weapon platforms are equipped with a powerful weapon & sensor package capable of neutralising threats in all three dimensions – Air, Surface & Sub-surface. To improve quality and shorten build times, P17A Advanced Frigates are being constructed using an Integrated Construction Methodology and improved pre-outfitting. M/s Fincantieri, an Italian company, is the project's know-how provider for technology upgrades and capability enhancement. Another distinctive feature of Project 17A is that construction is being carried out by GRSE simultaneously with MDL, based on the basic design created by the Directorate of Naval Design, Indian Navy. An intelligent PDM PLM system is also being implemented to manage the project and aid in its life cycle management.

As part of the Make in India initiatives of Ministry of Defence through indigenisation efforts, GRSE has made commendable progress by successfully incorporating a high percentage of indigenous content into the ships. INS Kamorta and INS Kadmatt, the First Two of Class of 4 ASW Corvettes built by GRSE, became the first warships built in the country with indigenously developed warship grade steel-DMR 249A.

These Ships and the Eight Landing Crafts built by GRSE for the Indian Navy, have the distinction of achieving over 90% Indigenous Equipment Fit and hence a major step towards attaining Self Reliance in State-of-the-Art Warship Design and Construction.

Since the takeover by the Government of India in 1960, GRSE has produced a wide variety of potent warships, including Frigates, Missile & ASW Corvettes, Landing Ship Tanks, LCUs, Fast Patrol Vessels, and Fleet tankers. Leveraging its modern infrastructure facilities, GRSE can now build multiple warships by employing advanced modular integrated shipbuilding technology, which is on par with the best global practices. The shipyard is now capable of producing 20 warships simultaneously and is ably poised to meet the future warship requirements of Indian Navy and Indian Coast Guard’s Next Generation Corvettes, Frigates and Patrol Vessels.