The Chief Minister of Assam Shri Himanta Biswa Sarma, Power Minister of the State Shri Bimal Bora and  Secretary, Ministry of Power, Government of India were also present in the meeting. 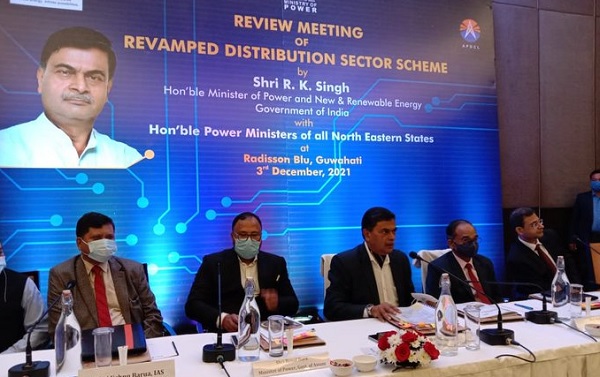 Shri Singh in his address said that power is the key to development and  a country can’t develop until and unless it has a seamless power supply. He further said that power is the most crucial element when it comes to the establishment of industries which is the core factor in a nation’s progress. Power sector has witnessed tremendous growth over the past few years in the areas of generation, transmission and distribution and the objective is to give 24×7 power supply to every household in the rural and urban areas of the country and to make India a world leader in power production , he added.

The minister informed that the availability of power in the country including North East has gone up to an average of around 21 hours per day in rural areas and 23 hours in urban areas.

Talking about the Revamped Distribution Scheme, Shri Singh said that this scheme will help to reduce the losses. He underlined  that the increasing demand for electricity has necessitated the strengthening and modernization of the Distribution infrastructure.  The minister further added that Implementation of the Scheme would lead to consumer empowerment by way of prepaid Smart metering. The scheme provides financial support for Prepaid Smart Metering & System Metering and up-gradation of the Distribution Infrastructure, the minister added.

Emphasising  on the need to modernize the system, Shri Singh elaborated that  in order to reduce losses, States need to focus on  Improving Billing Efficiency, ensuring timely payment for electricity consumption by Government Departments etc. The minister  said that with planning and sincerity in implementation, an operationally efficient and financially sustainable electricity distribution sector can be developed using this scheme, to meet the aspirations of citizens of the country.

The Chief Minister of Assam Shri Himanta Biswa Sarma, Power Minister of the State Shri Bimal Bora and  Secretary, Ministry of Power, Government of India were also present in the meeting.

The Central Government has approved a Revamped Distribution Sector Scheme- a Reforms-based and Results-linked Scheme with an outlay of Rs.3,03,758 crore over a period of five years from FY 2021-22 to FY 2025-26 with the objective to improve the quality, reliability and affordability of power supply to consumers through a financially sustainable and operationally efficient distribution sector.