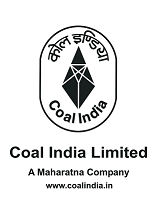 Coal India Limited is an Indian state-controlled coal mining company headquartered in Kolkata, West Bengal, India and the largest coal-producing company in the world and a Maharatna company. The company contributes to around 82% of the coal production in India.

Coal India Limited (CIL) as an organized state owned coal mining corporate came into being in November 1975 with the government taking over private coal mines. With a modest production of 79 Million Tonnes (Mt) at the year of its inception CIL today is the single largest coal producer in the world. Operating through 82 mining areas CIL is an apex body with 7 wholly owned coal producing subsidiaries and 1 mine planning and consultancy company spread over 8 provincial states of India. CIL also fully owns a mining company in Mozambique christened as 'Coal India Africana Limitada'. CIL also manages 200 other establishments like workshops, hospitals etc. Further, it also owns 26 technical & management training institutes and 102 Vocational Training Institutes Centres. Indian Institute of Coal Management (IICM) as a state-of-the-art Management Training 'Centre of Excellence' - the largest Corporate Training Institute in India - operates under CIL and conducts multi-disciplinary management development programmes.
CIL having fulfilled the financial and other prerequisites was granted the Maharatna recognition in April 2011. It is a privileged status conferred by Government of India to select state owned enterprises in order to empower them to expand their operations and emerge as global giants. So far, the select club has only seven members out of290 Central Public Sector Enterprises in the country (as on 31/03/2014, source-DPE).

New Delhi: State-owned CIL has given a go-ahead to a domestic firm for a Rs 1,880-crore coal bed methane (CBM) extraction project. The coal behemoth has in the second week of June invited bids from both domestic and overseas companies for two more coal bed methane projects.   The letter o
Posted Date :  17-06-21

New Delhi: The government will receive Rs 1,426 crore as dividend from Coal India Limited (CIL) after the dry fuel miner on Monday announced an additional final dividend of 35 percent or Rs 3.5 per share on equity shares of Rs 10 each, an official said. The total dividend payout for FY'21 stood
Posted Date :  16-06-21

Kolkata: Coal India Limited (CIL) in its new CSR initiative distributes wholesome packed meals in Kolkata to the near and dear ones of patients admitted in hospitals and unable to feed themselves as all eateries are closed to the lockdown. CIL has roped in ISKCON (International Society for Kris
Posted Date :  24-05-21

New Delhi: The largest coal-producing company in the world, Coal India Limited (CIL) has extended the financial assistance of Rs. 99 Lakhs under its CSR initiative for an oxygen generation plant for a 50 bedded COVID hospital and setting up of a 10 bedded ICU in the District Hospital, Simdega i
Posted Date :  10-05-21

Kolkata: Coal India Limited has started administering COVID-19 vaccinations to eligible employees who are 45 years of age or older, at its corporate headquarters in Kolkata. This has not only made it convenient for the employees but also helps them avoid travel to other centres for a vaccine th
Posted Date :  07-05-21

New Delhi: Coal India Ltd (CIL) on Tuesday said its operations slowed down on account of more than 5,400 of the company's employees and their wards across subsidiaries testing positive for coronavirus. However, offtake rose to 54.1 Million Tonnes (MTs) last month, the company said in a statement
Posted Date :  04-05-21

Kolkata: Coal India Limited (CIL) in a new CSR initiative has extended financial support of Rs. 22 Lakhs for the functioning of 100 Ekal Vidyalayas in Jharkhand. This unique concept of non-formal primary schooling is where one teacher, usually from the same village, teaches 25 to 30 students in the
Posted Date :  28-04-21

CIL's fight against Covid 19, Doctors and paramedics at Coal India leading the battle

Kolkata: The Doctors and paramedics at India's leading state-owned coal mining corporate, Coal India Ltd. are leading the battle from the front against COVID-19 by working tirelessly at its 37 CIL hospitals and dispensaries spread across eight states in India.    Putting their ow
Posted Date :  24-04-21

New Delhi: CIL has signed its first power purchase agreement for the sale of 100 MW solar power to Gujarat Urja Vikas Nigam Ltd (GUVNL) for a period of 25 years.  In its maiden venture into solar power, CIL had won a 100 MW solar power project in a reverse auction conducted by GUVNL.
Posted Date :  23-04-21

CIL planted a hundred million saplings over 39,000 hectares of land

New Delhi: Coal India Limited, an Indian government undertaking, and coal mining and refining entity under the ownership of the Ministry of Coal have planted a hundred million saplings over 39,000 hectares of land to mitigate climate change.   CIL has created 2.4 hectares of forest for ea
Posted Date :  22-04-21

CIL pays tribute to Dr. B. R. Ambedkar on his 130th birth anniversary