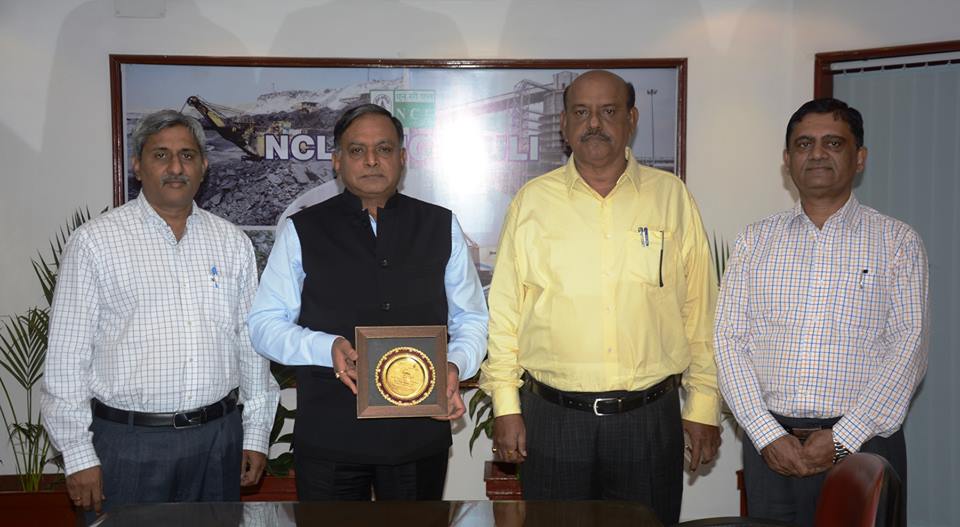 New Delhi: Shri PK Sinha, CMD, Northern Coalfields Limited has been conferred with the esteemed Indian Chamber of Commerce (ICC) PSE Excellence Award. The award has been conferred on Shri Sinha for his outstanding contribution in the national economy as a leader of a Public Sector Enterprise (PSE). The award was conferred on Shri Sinha in PSE Excellence Award held in the sidelines of 8th India Public Sector Agenda@2020 in New Delhi on Wednesday. The Chief Manager (Finance), NCL Shri D. Mehra received the award from Ex-Secretary, Union Ministry of Commerce & Industries on behalf of Shri Sinha.
Shri Sinha assumed the charge of CMD NCL from December 2017. Under his leadership, the company has touched new pinnacles on many fronts. Under his leadership, the company produced 93.01 million tonnes of coal and dispatched 96.73 million tonnes of coal in F.Y. 2017-18 which is not only more than the assigned targets but also highest so far in the history of the company. With this achievement, the company became the lone subsidiary of CIL to achieve the targets timely.
Under Shri Sinha’s leadership, the company has accepted the highest targets of 100 million tonnes of coal production and 100.50 million tonnes of coal offtake. The achievement of these grand targets will help the company enter the coveted 100MT tonne coal production club. The company is registering double-digit growth in coal production and off-take in current fiscal and by the end of August the company has registered a y-o-y growth of 13 % in coal production and 12% in coal off-take.
Shri Sinha has been awarded with prestigious awards during his tenure as Director (Technical/Project & Planning) of South Eastern Coalfields Limited (SECL) when the President of India conferred National Mine Safety Award to him. MGMI had also conferred the Best Mine Manager award to Shri Sinha consecutively for two years in 2012 and 2013. Shri Sinha has also presented various technical papers on coal in national and international forums.
Shri Sinha also represented Indian Coal Industry in World Mining Congress in the year 2008 in Poland and in year 2011 in Istanbul. Shri Sinha also represented the Indian Coal sector in International Mines Expo held in Las Vegas in September 2016.