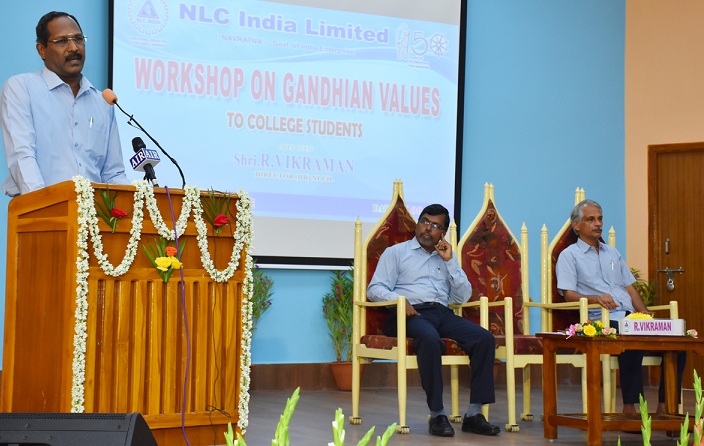 Neyveli: Shri R.Vikraman, Director/Human Resources has inaugurated a Pothigai Television channel and All India Radio, Puducherry joined hands with NLCIL in organising the programme. While inaugurating the programme, Shri R.Vikraman, Director/Human Resources, NLCIL said that Gandhiji  had dreamed to have an Independent and Clean India. He remarked that one of the dreams of Gandhiji was realised on our Nation became Independent whereas his main dream of making our Nation clean is yet to be fulfilled. Accordingly, the Government of India made large scale efforts and announced  a five year plan, “Swachh Bharat Mission” starting from October 2nd , 2014. This Five Year Programme ends on 2nd October 2019, the 150th Birth Anniversary of the Father of Nation, he added.
Shri Vikraman informed that  flush-out  toilet  system was in existence even during the Indus Valley Civilisation era, whereas the present open defecation practice prevailing in many villages is really a shame on us and indeed a matter of concern in this modern world.  He underlined the importance of providing toilets to all  to maintain a clean and healthy India. Further he added that NLCIL has constructed thousands of toilets  in schools in Tamilnadu and Rajasthan and now involved in construction of toilets outside the Railway Stations in Tamil Nadu and Uttar Pradesh.  He also informed  that  NLCIL has adopted three villages viz., Kolliruppu, Pallineerodai and Koranampattu to  ensure 100%  Open Defacation Free villages. He requested that the users of public toilets for maintaining proper cleanliness, so that other users can step in without any hesitation.
While speaking on the Solid Waste Management System, Shri Vikraman informed that it is mandatory to convert the solid and liquid wastes to useful products like generating power, production of Methanol etc.,  The bio-degradable wastes can be converted as Organic Fertilizer, he said.
Earlier Shri S.Shanmuga Sundaram, CGM/Learning & Development welcomed the gathering and Shri Abdul Khadhar, Secretary, Jawahar Science College proposed the Vote of thanks. Shri N.Sankar, CGM/Human Resources listed out the Swachh Bharat activities carried out by NLCIL for the past five years.  Senior Officials of NLCIL,  Doordharshan, All India Radio Puducherry, Professors and students of Jawahar Science College participated in the event.
After the inaugural session, the Debate on the topic “Which factor plays  a major role on Gandhian Values on the context of today -   Non-Violence or   Truth” ?  was staged.  Dr.V.T.Chandrasekaran, Principal, Jawahar Science College was the Jury for the Debate . On the stance of “Non-Violence”  Dr.Senthamarai Kannan  and Smt. Santhi Jayaraman spoke. Smt. Tamizharasi Senthilkumar and Shri Arunan are the Speakers for the “Truth” front. The young students received valuable take away for practicing Gandhian Values.