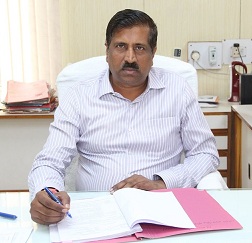 New Delhi: Shri S. M. Choudhary, a qualified Chartered Accountant, Cost and Management Accountant and Company Secretary with over 3 decades of experience in coal industry has taken charge as the Director (Finance) in South Eastern Coalfields Limited. Prior to taking charge at SECL, Shri. Choudhary was the Director (Finance) in Western Coalfields Limited since 3rd March, 2016. During this period, he also had additional charge of Director (Finance), SECL from 28/12/2018 to 04/04/2019.
Shri. S. M. Choudhary, along with his rich academic qualifications has completed certified course on IFRS and Indirect Tax from the Institute of Chartered Accountants of India. He began his career with Central Coalfields Ltd, Ranchi and since then has worked at different levels. Amongst various responsibilities during his career, he has also served as General Manager (Finance) at the Coal India Limited. His leadership qualities and sharp acumen was overtly visible during the work. Shri. Chaudhary has keen eye on day-to-day performance of the company and his participative management style inspires the team to excel in given task. His work has been recognized at various levels and he was conferred with various awards.
Shri Choudhary is a recipient of Special Achievement Award by CIL for formalities of Unique Financial Scheme related to Mine Closure Plan. He was conferred with Best CFO Award in PSU Category by the Institute of Chartered Accountants of India in its 11th ICAI Awards, 2017 on 19th January, 2018 in Mumbai. He has also been nominated as Member in the Central Committee for Entrepreneurship & Public Services (CMEPS) of the Institute of Chartered Accountants of India, New Delhi for the year 2019-20. He is associated with various professional bodies in various capacities. Shri. S. M. Choudhary was welcome by the CMD and Functional Directors in SECL.

Jaipur: Shri Rakesh Chopra took charge as Managing Director of Rajasthan Electronics & Instrumental Limited-( REIL) on 01.04.2020.   Shri Chopra  joined REIL as Engineer Trainee in 1986. Prior to taking over as MD , he was senior most General Manager and was looking for Electronics & Infor
Posted Date :  03-04-20