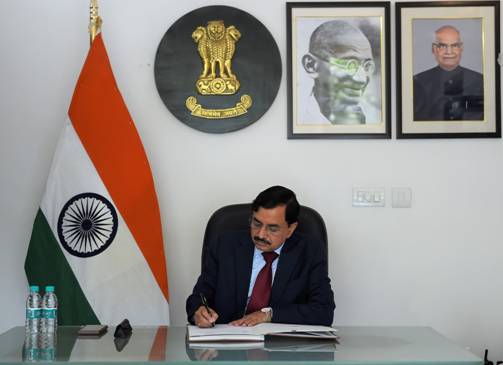 Since his tenure as Chairman, CBDT itself, Sh Chandra has played an active role in unearthing illegal money often used during Assembly Elections. With his continuous monitoring the seizures of cash, liquor, freebies, narcotics have increased substantially in recent elections. He has constantly emphasized the concept of "Inducement-Free" elections and it has become an important aspect of monitoring the electoral process in all ongoing and forthcoming elections. Process of focused and comprehensive monitoring through deployment of Special Expenditure Observers, activating the role of many more enforcement agencies in the process of Election Expenditure monitoring, more exhaustive and frequent reviews of observers and other agencies are few of the aspects of electoral management encouraged by him. His contributions are also reflective in systemic changes like the Form 26 that has now become an integral part of essential paperwork.

Shri Chandra as Chairman CBDT took special efforts in the area of verification of affidavits filed by the candidates before elections. In 2018 in his role as Chairman CBDT, Shri Chandra was instrumental in evolving a uniform format of sharing details of all assets and liabilities not mentioned in the affidavits of the candidates. Facilitation through innovative IT applications in Election systems have been a unique contribution of Sh Sushil Chandra to the 2019 17thLok Sabha Elections and the Legislative Assembly Elections held since in Andhra Pradesh, Arunachal Pradesh, Odisha, Sikkim, Haryana, Maharashtra, Jharkhand, Delhi.

Holding of elections to State Assemblies of Bihar, Assam, Kerala, Puducherry, Tamil Nadu and West Bengal amidst Covid concerns and making processes such as nomination and filing of papers online, extending option of postal ballot to the specific categories of senior citizens, Persons with Disabilities, essential services personnel as also Covid patients/suspects, has seen Sh Chandra lead from the front with an iron will to work despite challenges.

The ECI family bid a warm farewell to outgoing Chief Election Commissioner, Sh. Sunil Arora on 12th April, 2021. After a fulfilling tenure of nearly 43 months in Commission and nearly 29 months as CEC, Sh Arora demitted office having successfully steered the 17th Lok Sabha election in 2019 and  elections to 25 State Assemblies since joining ECI in September 2017.

Bidding farewell to Sh Arora, Election Commissioner Sh Rajiv Kumar recalled various initiatives taken up by the Commission during the tenure of Sh. Arora like providing optional postal ballot facility to senior citizen and PwD electors, setting up of India A-WEB Centre, and Voluntary Code of Ethics. He said that Shri Arora has laid special emphasis on ensuring inclusive and accessible elections during the term. He also added that Shri Arora would continue to be a source of strength to the entire ECI family.

Shri Sunil Arora in his remarks thanked all the members of the Commission and wished for the successful conduct of all future elections. Shri Arora recalled every election presents unique challenges but conducting elections to the 17th Lok Sabha and the decision to conduct Bihar assembly elections during a pandemic was the most difficult. He congratulated all the officials involved in the exercise for their meticulous planning and hard work to ensure the smooth and successful conduct of these elections.

New Delhi: The Centre has appointed T. Rabi Sankar as the Deputy Governor of Reserve Bank of India for three years or until further orders, whichever is earlier. Sankar was Executive Director of the Reserve Bank before being elevated to the post of Deputy Governor.   Sankar, a career c
Posted Date :  03-05-21

New Delhi: Shri. Vijay Goel assumed the additional charge of Chairman and Managing Director of THDC India Limited on 01.05.2021. It is to mention that Vijay Goel is also discharging the responsibility of Director (Personnel) of THDCIL.    Shri. Goel joined the corporation in the
Posted Date :  01-05-21

New Delhi: Sri Manoj Kumar, Chairman-cum-Managing Director (CMD) of Western Coalfields Limited (WCL) has been entrusted with the additional charge of CMD of CMPDIL. The order issued by the Ministry of Coal today in this regard will be effective from 1st May 2021 for a period of six months or till th
Posted Date :  27-04-21