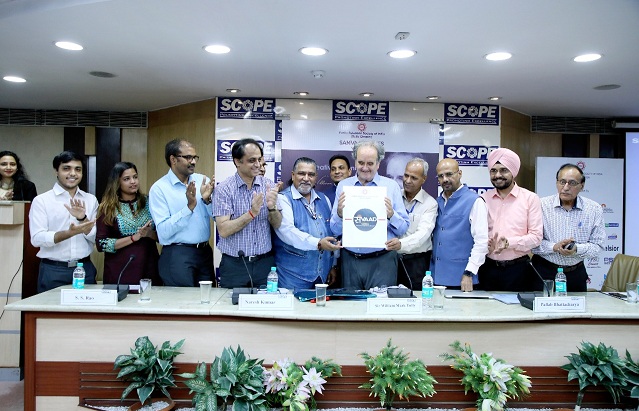 New Delhi: PRSI- Delhi Chapter launched the 'Samvad-Series' for the fraternity of fellow professionals. The Samvad Series was launched by Sir William Mark Tully, former Bureau Chief of the BBC, New Delhi, on 10th May 2019, at the SCOPE Convention Centre, Delhi with a Lecture on 'Creative Listening'. The Jam packed, Tagore Hall, with standing and overflowing audience witnessed the launch ceremony and listened Sir William Mark Tully with concentration, devotion and full understanding.  Sir William Mark Tully took Q&A session, which equally engrossed the audience and talk got extended to diversified subjects.  Sir mark Tully was given the Standing Ovation in the beginning of talk.  His was frequently greeted with heart felt clapping by the audience during his talk.
Mark Tully, who is known for his convictions and commitments on whatever he undertakes; opened the talk with references from Indian Mythology and Scriptures.  He emphasised that India and Indians are known for skilful communications and good communication is the foundation of good public relations. He emphasised, how listening is important to understanding the other person’s content and intent and this makes or breaks the relationships.  He dwelled upon, how art of listening is associated with development of self. He elaborated that it is listening that connects you with the inner-mind, intellect and Soul. He referred to Radio as one of the medium that inculcates habit of listening among the masses. He mentioned that listening gives you an opportunity to draw inferences from the speakers talk and you can draw you own imaginations in your mind about the situation and the individuals; as such it further inspires an individual to under take his creative pursuits. His narrations were highly appreciated by the audience and were supported with clapping. He highlighted the development of Radio in the post independence era.  He gave the analogy of fad for travel by air; how people travel by air even to destination which are more comfortable to cover by train or road; similarly fad for television is working against radio.
Mark Tully, touched upon the Samvad in the society in today’s contest in general and political context in particular.  He highlighted how over a period of time Samvad has been dominated by acquisitions and cross-acquisitions rather than constructive and convincing arguments and cross arguments.    He emphasised how creative and effective listening has been adopted by Mahatma Gandhi, Mother Teressa and other great leaders of the world in bringing together the masses and build nations.  He once again drew attention of PR professionals for deeply understanding this to meet the professional intent in developing and communication their message to the masses in a more efficient and effect manner.
This being the first lecture in the Series of Samavad; the Samvad Logo was unveiled by Sir William Mark Tully and on this occasion he invited the Executive Committee Members to join him; and he complemented the team PRSI-Delhi Chapter for this yeomen service to the society.
Earlier the Welcome address was given by Chairman, PRSI-Delhi Chapter, ShriNaresh Kumar.  Shari Pallab Bhattacharya, Executive Director (CC), ONGC introduced Sir Willaim Mark Tully to the audience and Shri GS Bawa introduced the Samvad Series and gave the punch line as “Productivity through Effective Samvad”. The program was summed up with the felicitation of the dignitaries on the dais  and a vote of thanks by the Shri SS Rao, Secretary, PRSI-Delhi Chapter.