The objective of this component is to provide the services of a holistic health model based on AYUSH principles and practices to reduce the burden of disease and empower the public for "self-care". 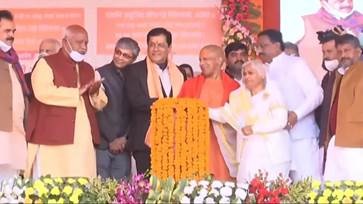 Uttar Pradesh: The Ministry of AYUSH announced a slew of major initiatives to push healthcare facilities in the state of Uttar Pradesh today. A total amount of Rs 553.36 crore has been released by the Government of India to Uttar Pradesh for various activities under the National AYUSH Mission. These major announcements were made by the Union Minister of AYUSH and Ports, Shipping & Waterways Shri Sarbananda Sonowal today in the presence of the Chief Minister of Uttar Pradesh, Yogi Adityanath.

In an effort towards building sustainable, effective and affordable healthcare in the country, eight new 50 bedded integrated AYUSH hospitals were inaugurated. These are located in Deoria, Koushambi, Sonbhadra, Lucknow, Kanpur, Sant Kabir Nagar, Kanpur Dehat, and Lalitpur. These were built with a total capital outlay of ?72 crores. A total of 500 new AYUSH Health & Wellness Centres (HWCs) were also inaugurated in different parts of the state.

Building upon this strong foundation of healthcare for people, the Union Minister laid foundation stone for a new AYUSH Educational Institute for Ayurveda with a capital outlay ?49.83 Crores. This new institute of Ayurveda will come up in Ayodhya. Further, foundation stones were also laid for six new 50 bedded hospitals which will come up in Unnao, Shrawasti, Hardoi, Gorakhpur, Sambhal and Mirzapur. The total outlay for this project is planned at ?78 crores. A total of 250 new AYUSH dispensaries will also be constructed in different districts of the state.

Speaking about the role of AYUSH in building a robust healthcare delivery system in the state, Shri Sonowal said, that construction of these 50-bedded integrated AYUSH hospitals, the public will get proper benefits of various AYUSH systems of medicine for their overall health. He further said that AYUSH Health & Wellness Center has been mainly constructed at the primary level, with the objective of taking care of the overall health of the people based on AYUSH principles and practices, so that people can lead a healthy life.

On this occasion, the Chief Minister of Uttar Pradesh, Yogi Adityanath said, that steps taken by the AYUSH Ministry will tremendously help common people.

The Centrally Sponsored Scheme of National AYUSH Mission being implemented by the Ministry of AYUSH, Government of India since 2014, aims at providing cost effective AYUSH services with a universal reach through up-gradation of AYUSH hospitals and dispensaries. Apart from this, strengthening the institutional capacity at the state level by upgrading AYUSH educational institutions and setting up of 50/30/10 bedded integrated AYUSH hospital is also one of the main objectives of this mission.

The Union Cabinet has also approved the operationalization of 12,500 AYUSH Health & Wellness Centers (AYUSH Health & Wellness Centers) component under Ayushman Bharat for implementation through National AYUSH Mission for the period up to 2023-24. The objective of this component is to provide the services of a holistic health model based on AYUSH principles and practices to reduce the burden of disease and empower the public for "self-care". Now, through the implementation of the National AYUSH Mission in the second phase which will continue till 2025-26, it is also proposed to launch a targeted AYUSH public health program involving States and Union Territories.