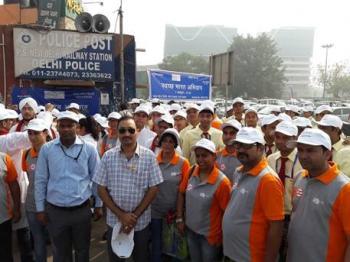 New delhi . Continuing its efforts of spreading the awareness of Cleanliness at tourist places, public places, offices etc., Northern Regional Office of the Ministry of Tourism organized a Swatch Bharat campaign at New Delhi Railway Station today.  The event drew huge response from across the section of society.

Over 150 staff/ volunteers / students from India tourism Delhi office, Delhi Metro Corporation, Institute of Hotel Management Pusa (IHM) Campus, members from travel industry participated in this event. A Nukkad Natak (Street Play) spreading the awareness of the cleanliness at tourist & other public places was organized by the IHM Students.

Cleanliness drive was organized at Ajmeri Gate Side of the New Delhi Station & around New Delhi Metro Station. Regional Director Northern India, Sh. Arun Srivastava led the team of motivated volunteers in cleaning up the streets, parking lot and other areas of the Station campus. Spreading the awareness of Green India, over 200 saplings were also distributed at the end of the program to various people.

In order to spread the message of Go Green saplings were also planted in the station premises. While thanking everyone for participation in this effort, Shri Srivastava stressed the need of inculcating the habit of cleanliness in every child right from the beginning itself and efforts would be made on regular basis to organize such events at important public & tourist places.