IndianOil, Chairman dedicated 2022 as the year of Crafting A Green Future

We are geared to step-up our green stewardship as we partner the nation towards a cleaner, prosperous tomorrow-Mr. S M Vaidya 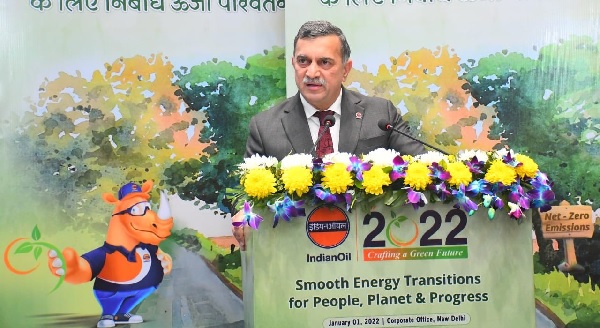 During Indian Oil's New Year 2022 celebrations, Chairman, IndianOil, Mr. S M Vaidya dedicated 2022 as the year of Crafting A Green Future and said, "IndianOil has been the prime mover of India's transitional journey. Our drive to catalyse the greening of India's energy basket was vindicated when our Hon'ble Prime Minister announced India's commitment to achieving the Net Zero Target by 2070. And this year, we are geared to step-up our green stewardship as we partner the nation towards a cleaner, prosperous tomorrow".

Underlining IndianOil’s green-resolve, Mr Vaidya shared, "We have forged a partnership with the "National Mission for Clean Ganga" at Mathura Refinery for reusing the city effluent from a Sewage Treatment Plant for Refinery operations. This project is close to completion, and once implemented, nearly 20 Million gallons of Yamuna water will be conserved every day. Mathura Refinery will be the first Refinery in the world to achieve such a green breakthrough. We will be replicating this model in other refineries gradually."

Highlighting IndianOil’s focus on natural conservation, Mr Vaidya further added- “IndianOil will be collaborating with the Ministry of Environment & Forest and Climate Change, to steer the 'Cheetah Introduction Project' at Kuno National Park in Madhya Pradesh. In India, Cheetah went extinct in 1952 and the numbers are dwindling at an alarming rate the world over as well. This project thus assumes historical importance and I am happy that IndianOil will power this important initiative that will strengthen the natural ecosystem and restore the country’s lost natural heritage".