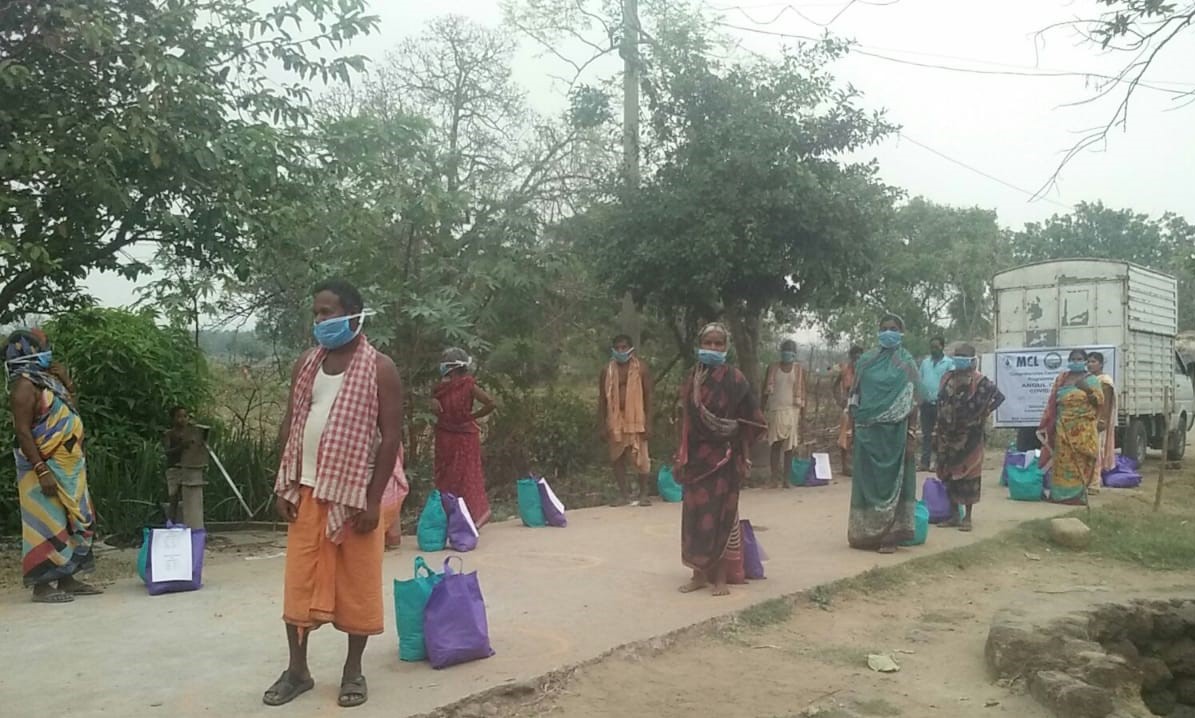 Sambalpur: Mahanadi Coalfields Limited (MCL) has intensified sanitization operations in its residential colonies and peripheral villages in the coalfields of Odisha. All mining areas of MCL, spread over in Angul, Jharsuguda and Sundergarh districts of the state, have launched sanitization operations in office premises as well as peripheral villages.

Besides manual sanitation in the townships and peripheral areas, company has pressed into service ‘fog cannons’, fire tenders and even tractor mounted tanker with pumps to sanitise townships and peripheral settlements. With an internal task force headed by a General Manager-level officer and round the clock helplines at Corporate office and both Ib Valley and Talcher coalfields, MCL is diligently extending support to the local administration in fight against corona virus.
Coal India’s subsidiary has already distributed 29,000 masks to its employees and contractors’ workers engaged in coal mining while 90,000 are in the process of procurement for further distribution. Company has also distributed sanitizers among its workforce. Reaffirming its commitment to the peripheral settlements around its operational areas, MCL is distributing under CSR 3,73,622 face masks along with 19,600 sanitiser bottles to the peripheral people and ‘Covid warriors’ of nearby areas.
The company is providing health and food kit combos to 600 landless people and stranded migrant families of Jujumura (Sambalpur), Chhendipada (Angul), Lepripada (Sundargarh), and Lakhanpur (Jharsuguda) blocks through its ongoing ‘Utthan’ project of Community development being implemented by BAIF. It is also assisting operationalisation of a migrant shelter home established by the administration at Topria UP school in the State border of Sundargath district.

New Delhi: BCCL, a Public Sector Undertaking engaged in the mining of coal and allied activities has been consistently committed to promoting women empowerment policies for its female employees. Under the visionary leadership of CMD BCCL Shri Gopal Singh, the inauguration of children-home-cum-play s
Posted Date :  20-01-21

Meghalaya: India has rolled out the world's largest covid vaccination programme and is in the process to reach each and every part of the country so that no citizen is left in the COVID Vaccination Program.   In this noble initiative, NEEPCO is entrusted with the responsibility to provid
Posted Date :  18-01-21

CCL’s bag of happiness for the needy

Madhya Pradesh: Northern Coalfields Ltd. organized a free medical camp at  Khatkhari gram panchayat in Madhya Pradesh in a new CSR initiative. The medical team of the Nigahi area organized this free health camp where 40 pregnant women and 25 children who attended the camp were given vitamin B C
Posted Date :  09-01-21

Ranchi: Team CCL Led by CMD enthusiastically donated in collection camp under the 'Winter Relief Campaign' organized by CCL in association with non-profit agencies at HQ.  Hundreds of new and old blankets along with warm clothes were donated. These blankets and clothes will be distri
Posted Date :  09-01-21

West Bengal: Rail Vikas Nigam Ltd handed over a Mobile Medical Van to Ram Krishna Mission in West Bengal as a part of its CSR initiative on December 31, 2020. RVNL is a schedule A Mini Ratna CPSE under the Ministry of Railways engaged in rail infrastructure development. RVNL was incorporated as a
Posted Date :  04-01-21

Singrauli: Northern Coalfields Ltd. distributed 370 blankets in its CSR activity, "winters can be very harsh to the poor and downtrodden in order to help them cope with the winters," NCL mentioned. The company distributes the blankets to the residents of Birkuniya village in Singrauli,
Posted Date :  04-01-21