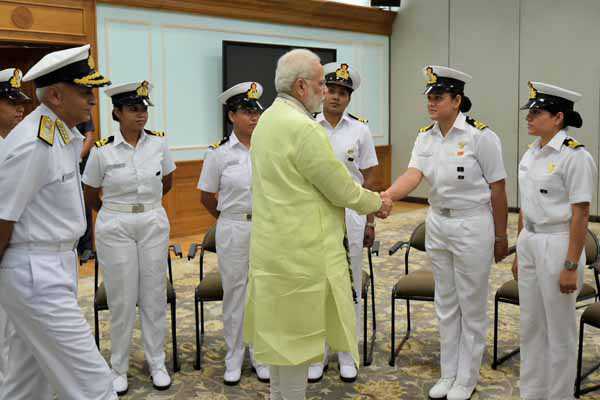 New Delhi: Six women officers of the Indian Navy, who are due to circumnavigate the globe on the sailing vessel, INSV Tarini, called on Prime Minister Narendra Modi.

This is the first-ever Indian circumnavigation of the globe by an all-women crew. They will begin their voyage later this month from Goa, and expect to return to Goa in March 2018, after completing the circumnavigation. The expedition has been titled Navika Sagar Parikrama. The Parikrama will be covered in five legs, with stop-overs at 4 ports: Fremantle (Australia), Lyttleton (New Zealand), Port Stanley (Falklands), and Cape Town (South Africa).
INSV Tarini is a 55-foot sailing vessel, which has been built indigenously, and was inducted in the Indian Navy earlier this year.
During the interaction, the crew explained details of their upcoming voyage to the Prime Minister. Prime Minister wished the women crew well, and said he would keep track of their progress around the world. He exhorted them to project India’s capabilities and strengths across the world. He also encouraged them to write and share their experiences, after the successful completion of the voyage.
The vessel will be skippered by Lt. Commander Vartika Joshi, and the crew comprises Lt. Commanders Pratibha Jamwal, P Swathi, and Lieutenants S Vijaya Devi, B Aishwarya and Payal Gupta.

New Delhi: Speaking on the stronger financial system, and banking reforms Prime Minister of India points out the banking financial sector said Our top priority is to ensure that the depositor as well as the investor experiences trust and transparency. The old ways and old systems of banking and non-
Posted Date :  27-02-21

Not possible to remain the owner of many CPSEs, should focus on public welfare: PM Modi

New Delhi: Coming Back on the privatisation process, Prime Minister Shri Narendra Modi on Wednesday address the webinar on privatization and asset monetization, attended by the top investor bankers, sovereign and pension funds as well as domestic and international investors. Prime Minister is now
Posted Date :  26-02-21

New Delhi: Prime Minister Shri Narendra Modi dedicates to the nation & lay the foundation stone of multiple infrastructure projects worth over Rs 12400 crores in Puducherry and Tamil Nadu, the Union housing and urban affairs ministry said on Thursday, ahead of the Prime Minister’s vis
Posted Date :  25-02-21

New Delhi: Prime Minister Shri Narendra Modi addressed a webinar on the effective implementation of Budget provisions in DIPAM today through a video conference. Addressing the webinar, the Prime Minister said this budget has put forward a clear roadmap to take India back to the high growth trajec
Posted Date :  24-02-21

New Delhi: Prime Minister of India on Wednesday speaks after opposition parties criticised BJP on price hike on petrol for the ninth consecutive day. Petrol price hits Rs 100 per ltr for the first time in the country.    Speaking on this, PM said, that the middle class would not ha
Posted Date :  18-02-21

New Delhi: Prime Minister Shri Narendra Modi will address the NASSCOM Technology and Leadership Forum (NTLF) on 17th February 2021 at 12:30 PM via video conferencing. About NTLF The 29th edition of NTLF is being organised from 17th to 19th February 2021. It is the flagship event of the Nationa
Posted Date :  16-02-21

Work is underway to make India a hub for sea-food exports: PM at projects launch in Kochi