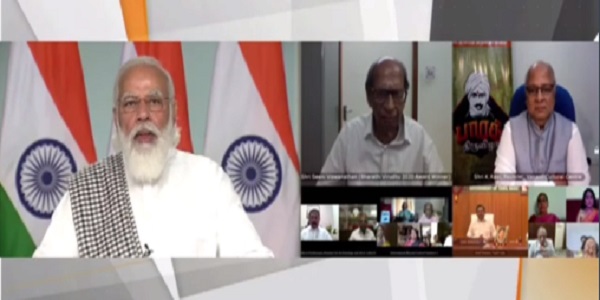 New Delhi: Prime Minister Shri Narendra Modi addressed International Bharathi Festival 2020 through video conferencing and paid tributes to the Bharathiyar on his Jayanti. The festival is being organized by Vanavil Cultural Centre to celebrate the 138th birth anniversary of Mahakavi Subramanya Bharathi. The Prime Minister Congratulated the Scholar Shri Seeni Viswanathan, for receiving the Bharathi Award for this year who was presented the award during the event.
The Prime Minister said describing Subramanya Bharathi is very difficult. Bharathiyar cannot be linked to any single profession or dimension. He was a poet, writer, editor, journalist, social reformer, freedom fighter, humanist, and much more, Shri Modi said.
The Prime Minister remarked that one can only marvel at the body of work of the great poet, his poems, his philosophy, and his life. Shri Modi recalled the Mahakavi’s close link with Varanasi. Praising Bharathi, the Prime Minister said in a short life of  39 years he wrote so much, did so much, and excelled in so much. His writings are a guiding light to us towards a glorious future.
The Prime Minister remarked that there is much that our youth today can learn from Subramania Bharathi. Most importantly to be courageous. Fear was unknown to Subramania Bharathi. Quoting Bharathi “Fear I have not, fear I have not, Even if all the world opposes me,” the Prime Minister said that he sees this spirit in Young India today when they are at the forefront of innovation and excellence. He added India's start-up space is filled with fearless youth who are giving something new to humanity.  Such a  'can do' spirit will bring wonder for our nation and our planet, he added.
The Prime Minister said Bharathiyar believed in a healthy mix between the ancient and the modern. He said Bharathi saw the wisdom in staying connected with our roots as well as looking towards the future and considered Tamil Language and motherland India as his two eyes. Bharathi sang songs of the greatness of ancient India, the greatness of the Vedas and  Upanishads, our culture,  tradition, and our glorious past. But at the same time, he also warned us that simply living in the past glory is not enough. Shri Modi urged the need to develop a scientific temper,  a spirit of inquiry, and march towards progress.
The Prime Minister said Mahakavi Bharathiyar's definition of progress had a central role for women. One of the most important visions was that of independent and empowered women.  Mahakavi Bharathiyaar wrote that women should walk with their heads held high while looking people in the eye. The Prime Minister said the Government is inspired by this vision and is working to ensure women-led empowerment. In every sphere of the Government's working,  there has been important given to the dignity of women. He said today, over 15 crore women entrepreneurs are funded by schemes like  MUDRA Yojana. Today, women are becoming part of our armed forces with permanent commissioning. Today,  the poorest of the poor women who used to face problems of lack of safe sanitation, are benefited by over 10 crore safe and hygienic toilets. They do not have to face problems anymore. “This is the era of New India's Nari Shakti. They are breaking barriers and making an impact. This is New India's tribute to  Subramania Bharathi”, Shri Modi said.
The Prime Minister remarked that Mahakavi Bharathiyaar understood that any society which is divided will not be able to succeed. At the same time, he wrote about the emptiness of political freedom which does not address the social inequities and does not address social ills. Quoting Bharathi “Now we will make a rule, and enforce it ever If ever one man faces starvation the world has to atone on pain of destruction,” the Prime Minister said his teachings are a strong reminder to us to remain united and committed to the empowerment of every single individual, especially,  the poor and marginalized.
The Prime Minister said there is a lot our youth have to learn from Bharathi wished that everyone in our country reads his works and is inspired by him. He praised Vanavil Cultural Center for their wonderful work in spreading the message of Bharathiyar and was confident that this festival will have productive deliberations that will help steer India into a new future.