While referring to the role of renewables in the farm sector, The Minister informed about the PM- KUSUM scheme, which aims to replace 20 lakh diesel pumps with stand-alone Solar Pumps, solarize 15 lakh grid connected pumps, and 10 GW decentralized solar power plants in uncultivable lands of farmers within next four years. 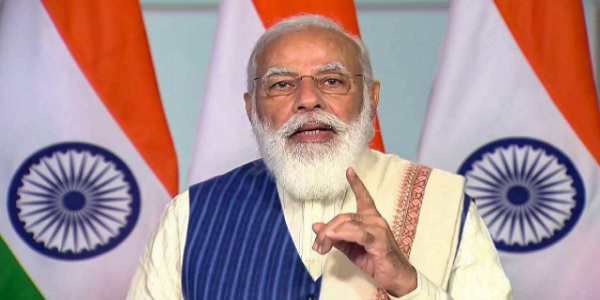 PM Shri Narendra Modi (PSU Connect)
New Delhi:Prime Minister Shri Narendra Modi will inaugurate the virtual 3rd Global Renewable Energy Investment Meeting and Expo (RE-INVEST 2020), on 26 November 2020.  The Secretary of State for Business, Energy and Industrial Strategy, UK & President COP-26; and the Minister of Energy, Utilities and Climate, Denmark will attend and speak in the inaugural session.
Shri R.K. Singh, Minister for New and Renewable Energy, informed that the 3rd RE-Invest will build upon the success of the first two editions held in 2015 and 2018 and provide an international forum for investment promotion in renewable energy. It will also send signals to the global renewable community about India’s commitment to the development and scaling up of renewable energy to meet its energy requirements in a sustainable manner.
RE-INVEST 2020 will include a two-day virtual conference on renewables and future energy choices and an exhibition of manufacturers, developers, investors and innovators engaged in the clean energy sector. The event will provide a great opportunity to various countries, states, business houses & organizations to showcase their strategies, achievements and expectations. It would facilitate collaboration and cooperation with key stakeholders in India, which has emerged as one of the world’s largest renewable energy markets today.Ministerial Delegations from across the world, global industry leaders, and large number of delegates are expected to participate in the event. The event will include 6 focused country sessions, alongside over 20 plenary and technical sessions, a special Chief Ministerial plenary session. Over 200 speakers including around 80 international speakers will speak in various sessions. RE-INVEST also includes an exhibition with over 100 exhibiting companies.
The Minister informed that during the last six years, India’s renewable energy capacity has increased by two and half times. Solar energy capacity has increased 13 times. The share of non-fossil fuel energy sources in our power generation capacity has increased to 136 GW, or about 36 per cent of our total capacity. By 2022, the share is expected to further increase to over 220 GW.  He further mentioned that while COVID 19 has caused significant disruption, the renewable energy sector has rebounded remarkably. The pace of bidding for RE projects since the lock down is even faster than the for the corresponding period last year.  In India during the last 6 years, over Rs 4.7 lakh crore were invested and India has become a favoured destination for investment in renewables.  India’s plans for renewables for 2030 will translate into an investment opportunity of around Rs 1 lakh crore per year. India has very liberal foreign investment policy for renewables, allowing foreign investors, either on their own or in joint ventures with Indian partners, to set up renewable energy based power generation in India.
Shri Singh informed about efforts for creating an enabling ecosystem for domestic manufacturing of solar PV cells and modules.  Government schemes alone have created a domestic demand and assured market of around 40 GW of domestically manufactured solar PV cells and modules. He further informed about the recently announced Production Linked Incentive for manufacturing Solar PV, which is expected to give a fillip to domestic manufacturing.
While referring to the role of renewables in the farm sector, The Minister informed about the PM- KUSUM scheme,  which  aims to replace 20 lakh diesel pumps with stand-alone Solar Pumps, solarize 15 lakh grid connected pumps, and 10 GW decentralized solar power plants in uncultivable lands of farmers within next four years. In addition, initiative to include solarisation of agricultural feeders under the scheme has been taken. This would significantly reduce the subsidy burden of States.
The Minister also stated that the Government had taken a number of facilitative policy measures to ensure “ease of doing business” for renewable energy in the country, and to address any emergent challenges. RE-INVEST is also an step in this ongoing process which will inform about the Government’s plans and programmes and also foster engagement among industry, investors and other stakeholders to take forward India’s renewable growth story.