Guwahati Refinery, known as the Gangotri of IndianOil, was dedicated to the nation on this day in 1962 by our first Prime Minister of India, Pandit Jawaharlal Nehru. 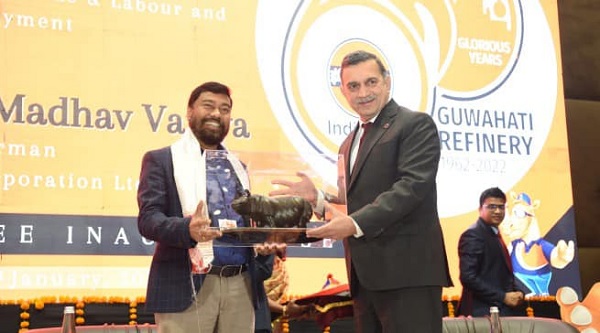 Union Minister of State, Mo P&NG, Labour & Employment, Shri Rameshwar Teli, inaugurated the Diamond Jubilee celebration of Guwahati Refinery which is the first Public Sector Refinery of the country on 1st January 2021. Guwahati Refinery, known as the Gangotri of IndianOil, was dedicated to the nation on this day in 1962 by our first Prime Minister of India, Pandit Jawaharlal Nehru.

Speaking on the occasion, Chairman IndianOil Mr. Shrikant Madhav Vaidya said, "Amongst the foremost 'Temples of Modern India', Guwahati Refinery charted out the blueprint that the Indian Public Sector Enterprises will follow to strengthen India's core industrial competence while ushering in an era of balanced progress.

Today, we celebrate a milestone which is not only historic from IndianOil's perspective but also stands out as a transformational leap for the Indian energy sector".

During the special event, to mark IndianOil's core value of care, financial assistance was extended to the school authorities of Guwahati Refinery High School and Noonmati High School for carrying out infrastructure development. In another outreach, medical kits were handed out to the students of Auxiliary Nurse Midwife (ANM). The event also witnessed the handing over of an audio series that covers the rich musical heritage of Assam to Dr. Kuladhar Saikia, President of Assam Sahitya Sabha.