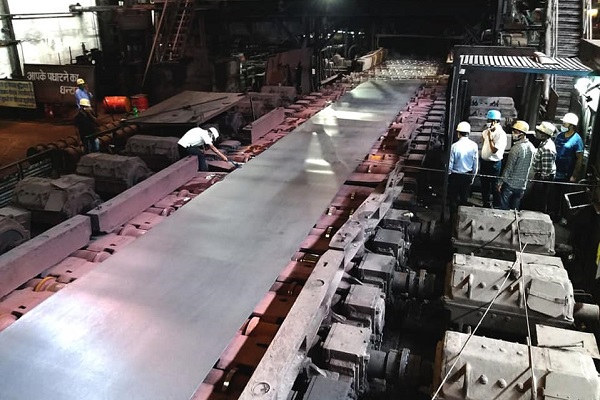 It is worth mentioning that with several members of the Plate Mill team that has so far been engaged in rolling of Midhani slabs not present due to Covid conditions, a new team was prepared and deployed for rolling.

This was the 13th time that MDN 250 slabs have been rolled under strict tolerances into plates of desired thickness for use in SLVs used in India’s space research programmes.

Successful rolling of maraging steel in Plate Mill has been achieved by meticulous planning in association with MIDHANI & VSRC. These forged slabs of special steel of very high strength and high temperature resistance consisting of high percentage of expensive alloying elements were rolled into thinner plates of 9.3 mm thickness. Special care is taken during reheating of the slabs and rolling. Stringent technological norms have been formulated and followed by the entire collective of Plate Mill, RCL & Instrumentation Depts along with several other associated departments.

The previous occasion when 40 Tonnes of MIDHANI slabs were rolled in SAIL-BSP’s Plate Mill was on 20th Oct 2020, prior to which rolling took place on 29th July 2020. The plates rolled were for use in ISRO’s satellite launch vehicle that would launch India’s ambitious Space Mission programme, Gaganyan.

SAIL-BSP has been contributing to India’s space programme of launching satellites at regular intervals by rolling MDN 250 slabs supplied by MIDHANI, Hyderabad into 9.3 mm thick plates at Bhilai’s Plate Mill. The plates have been used in outer motor casing of PSLV and GSLV satellite launch vehicles of ISRO, including SLV used for launching Chandrayan.

Besides supplying rails for Indian Railways, BSP supplies wide and heavy plates for Indian Navy’s warships and required grades of steel for infrastructure projects and varied industrial applications. By rolling out the special grade slabs as per stringent specifications for use by ISRO for its space missions, SAIL-Bhilai has taken another step forward in the direction of “Atmanirbhar Bharat.” The first lot of slabs from MIDHANI was rolled at Bhilai’s Plate Mill in Oct 2009.