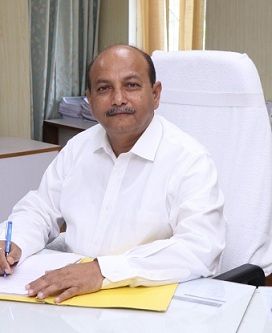 India is going through difficult times due to Covid 19. The country is under lockdown. In these tough times also, SECL miners had been relentlessly working to meet coal requirements of the Nation. Precautions are being taken but top priority was always ‘The Nation.’ It was this feeling in each Coal Miner that led to whole hearted contribution from each one. The dedication of our Miners is now overtly evident in the annual figures of coal production.
Under the able leadership and guidance of SECL CMD, Shri. A. P. Panda, the company has contributed 25% to the total Coal production of Coal India Limited. CIL during financial year 2019-20 has produced 602.14 MT of coal, out of which SECL contributed 150.545 Million Tonnes. The second largest coal producing subsidiary of CIL is over 10 MT behind and the third is over 42 MT behind SECL. The production rally continued all year through in SECL and it crossed 150 MT coal production mark, the second time. SECL has crossed this benchmark of 150 MT coal production consecutively during last two financial years. No other subsidiary of CIL has been able to achieve this benchmark.
Several coal production records were created and broken during this rally. The most remarkable being the Largest Single Day coal Production on 27.03.2020. SECL produced 1 Million Ton of Coal on this single day. Towards the end of financial year, the production spree continued like never before and crossed 9 lakh Tonnes of single day coal production on 26th and 31st March. Likewise, SECL crossed 8 lakh Tonnes single day coal production on 23rd, 20th, 19th, 18th of March 2020. These single day coal production peaks immensely added to the pinnacle that SECL today stands on.
Various Areas of SECL have also fared well during this period significantly adding up to the total tally. Gevra Area produced a total of 45 MT during this year and met its annual target. Kusmunda Area produced 42.331 MT of coal and crossed its annual target. Other areas have also made significant contribution.
SECL has been a responsible PSU. It has not only been The Best in coal mining but also has been a huge support for its neighboring areas and the people residing therein. Recently, as a positive step to combat Covid 19, SECL has contributed 1.75 Crore Rupees i.e., Rs. 25 lakhs each to Bilaspsur, Korba, Annuppur, Surajpur, Balrampur Ramanujganj, Umaria and Shahdol District administration. The financial support would from SECL would strengthen battle against Covid 19 in respective districts. To tackle any untoward situation arising out of Covid 19, SECL has made total of 132 Quarantine/Isolation beds available at Shahdol, Anuppur, Korea, Umaria, Surajpur and Korba. SECL took to Sanitization of offices & townships, social distancing and work with minimum workforce, wherever possible. Even during the days of complete Lockdown, Coal Production being an essential service, SECL continued working. The hard work seems to have delivered.
Today, SECL is again the Nation’s Single Largest Coal Producing Company! Shri. A. P. Panda, CMD, SECL congratulating Team-SECL and all its stake holders, attributed SECL’s achievement to its culture of hard work, team spirit, commitment and ability of the organization to stick to job even during difficult times.

New Delhi: Dr Pritam Singh a renowned academician and institutional builder passed away due to cardiac arrest at a private hospital in Gurugram. Dr Singh was 78 and is survived by his two sons Dr Vikas Singh , Dr Vipul Singh , his daughter , wife and many grandchildren. Dr Singh was conferred
Posted Date :  04-06-20

NTPC set up a help line for employeees

New Delhi: NTPC has set up a help line number ( 0120- 4948100 till 7 am to 11 pm ) for PRMS members and employees to extend the help and support in addressing the COVID-19 related quarry viz information o testing centers, probable treatment centers in Govt / NTPC empanneled hospitals and other r
Posted Date :  04-06-20

Srinagara: With substantial efforts, AAI's Srinagar Airport is striving to redefine safety while travelling. To reduce the risk of COVID19, cleaning staff is frequently sanitizing all touchpoints. The passengers are availing contactless provisions right through entry till the aircraft gate.
Posted Date :  04-06-20

New Delhi: SAIL on Wednesday said a few of its employees working at the company's corporate office have tested positive for COVID-19. There are five employees whose coronavirus test results have come positive, a source said. "In the wake of rising COVID-19 infections in the country, a few emp
Posted Date :  04-06-20

Kolkata: Coal India Limited and its companies have distributed 35,000 food packets and bottled water to migrant workers travelling back to their homes on 22 Shramik Special trains. The food packets and water bottles were distributed at Asansol, Bilaspur Mughalsarai and Singrauli, Dhanbad Ranchi
Posted Date :  04-06-20

New Delhi: NTPC has started scouting for a professional CEO to oversee its power distribution business where the company plans a big foray. It has issued advertisements in media for the appointment of a CEO asking qualified professionals to apply for the position that will offer best in the indus
Posted Date :  03-06-20

New Delhi: Pratibha Mahila Manal of Hingula Area donated Rs.50,000/-on 2.6.2020 to Odisha State Govt. as a token amount contribution towards the fight against COVID-19 Pandemic. Pratibha Mahila Mandal is committed towards undertaking social-welfare activities through out the year in the nearb
Posted Date :  03-06-20

Kolkata: During the prevailing pandemic conditions due to Covid 19, GRSE has been actively supporting the local population of Metiabruz area by providing masks, sanitisers, food grains etc. and the Traffic and Local Police by providing face masks and sanitisers.   In a gesture to express
Posted Date :  03-06-20

New Delhi: Lodna Area BCCL operates Quarantine Centre for migrants 79 migrant workers are being sheltered at Lodna Area's Quarantine Centre. 3 meals a day and 2 snacks a day are being provided to them daily. In addition, early morning Yoga is conducted in order to boost their immune system an
Posted Date :  03-06-20