The Union Minister also interacted with some artisans who expressed happiness in receiving government support. 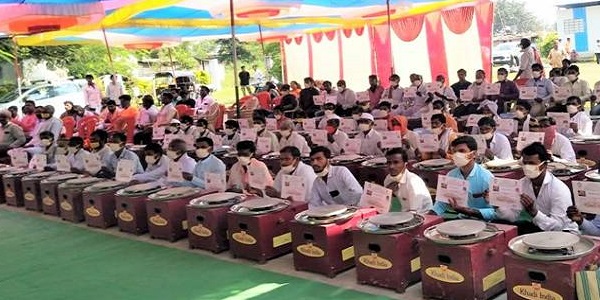 Shri Nitin Gadkari distributed electric potter wheels (PSU Connect)
Maharashtra: Union Minister for MSME and RTH Shri Nitin Gadkari distributed electric potter wheels, through Video Conference, to 100 potter families in Nanded and Parbhani districts of Maharashtra as a major step towards empowerment with KumharSashaktikaranYojana of Khadi and Village Industries Commission (KVIC) on Wednesday. through video-conference, who have been given 10-day training by KVIC.
The potters belong to 15 villages - 10 villages in Nanded and 5 villages in Parbhani districts - who were distributed the pottery equipment. The distribution of equipment will benefit at least 400 members of the community by increasing their productivity and their income, which is the dream of Prime Minister Shri Narendra Modi.
Shri Gadkari lauded the KumharSashaktikaranYojana of KVIC saying this was the first-of-its-kind initiative taken since independence to strengthen and improve the living of potters in the country. “Empowering the marginalized potters’ community and reviving the dying art of pottery is the dream of the Prime Minister. With proper training and distribution of advanced equipment under KumharSashaktikaranYojana, the productivity and income of potters have increased manifolds. The scheme will further be implemented in other remote areas of Maharashtra and other states,” Shri Gadkari said.
On this occasion, the Union Minister also interacted with some artisans who expressed happiness in receiving government support. They said with an increase in production using electric potter wheel, they were now earning 3-4 times more than what they earned earlier.
KVIC Chairman Shri Vinai Kumar Saxena, who joined through video-conference, said that more than 18,000 electric chaaks have so far been distributed across the country benefiting nearly 80,000 people of the community. He said the average income of potters under KumharSashaktikaranYojana has gone up from nearly Rs 3000 per month to nearly Rs 10,000 per month. “Empowering every potter in the country is the sole objective of the program and KVIC will spare no effort in achieving this goal,” he said.

New Delhi: SECL CSR head gave the approval of Rs.7 crore 11 lakh Under its CSR activities for construction of the new building of Tribal Government Higher Secondary School, Korba.    From the amount approved by the company management, a check of Rs. 2 crores 64 lakh 50 thousand was h
Posted Date :  03-08-21

New Delhi: REC Limited has committed financial assistance to the tune of Rs 4.99 crores through its CSR arm REC Foundation to The Leprosy Mission Hospital. As part of the project, Rs 42 lakh has been sanctioned for “Construction of Operation Theater complex in The Leprosy Mission
Posted Date :  31-07-21

Jharkhand: SAIL–Bokaro Steel Plant (SAIL-BSL) has provided 10 computers to the refurbished Computers Lab of “Bokaro Private ITI”, which was inaugurated on 29th July 2021. SAIL–BSL has provided these computers under its of Corporate Social Responsibility (CSR) scheme.
Posted Date :  31-07-21

Ahmedabad: Housing and Urban Development Corporation Ltd. (HUDCO) has provided two ambulances with ACLS facility to Civil Hospital Ahmedabad under its CSR initiative to facilitate emergency treatment of patients, while on way to Hospital.    The CSR grant of Rs 70 lakh was provided t
Posted Date :  10-07-21

SECL to assist 83 schools in Chhattisgarh

Chhattisgarh: In a new CSR initiative, the Raigarh region of South Eastern Coalfields Ltd. will be extending financial assistance of Rs. 276 lakhs towards the introduction of smart classes in 83 Government schools of Raigarh, Dharamjaigarh, and Kharsia in Chhattisgarh.    Teachers wi
Posted Date :  09-07-21