Shri RCP Singh pointed out the current progress, Steel production in the country is likely to achieve record production of 115 million metric tonnes this year. 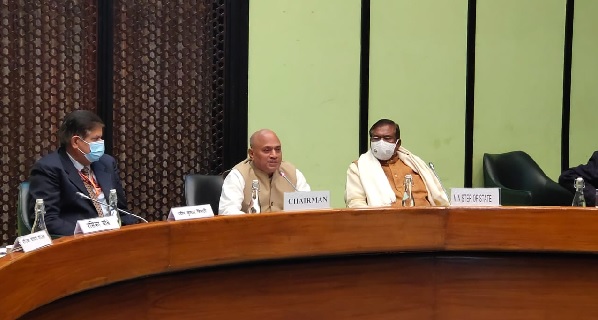 New Delhi: The Union Minister of Steel Shri Ram Chandra Prasad Singh, Chaired a meeting of the Consultative Committee of the Ministry of Steel today and all the members deliberated on the issue of “Development of manganese ore industry in India”. Minister of State for Steel and Rural Development Shri Faggan Singh Kulaste and senior officers of the Ministry of Steel and the CPSEs were present in the meeting.

Union Minister of Steel, and Chairman of the committee, Shri Ram Chandra Prasad Singh Directed CPSEs under Ministry of Steel to take up the issue of manganese ore exploration with state Governments and to explore possibilities of new manganese bearing areas in India to boost the domestic production of manganese ore as per National Steel Policy,2017 which will help in achieving the objective of “Atma Nirbhar Bharat”.

Shri RCP Singh also pointed out that as per the current progress, Steel production in the country is likely to achieve record production of 115 million metric tonnes this year .

Hon’ble members of the committee suggested for exploration and survey of minerals in Jharkhand, Odisha and Karnataka and that a Research & Development team to be constituted to work out the possibility of usage of manganese in E-vehicles batteries.