After Covid 19, KCC Bank distributed Rs 1200 crore to farmers from all kinds of loan scheme at very low interest rate. Among these, the farmer's agricultural equipment loan, agriculture, long-term and short-term loans are given. 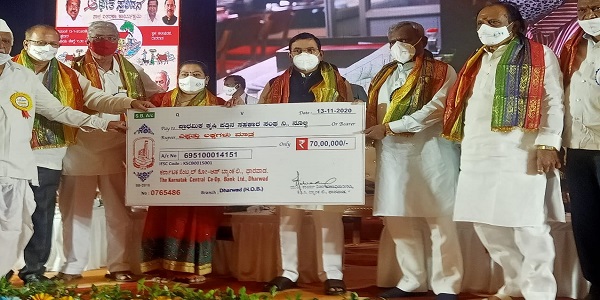 Karnataka: Economic Response - Loan Distribution Program - During the difficult time of Covid-19, participated in a program organized by District Central Cooperative Banks and District Co-operative Milk Unions of Belagavi Province under various schemes formed by Central and State Governments.
In the background of Covid-19 epidemic, Honorable Prime Minister Shri Narendra Modi has implemented an unprecedented project called ′′ Self-dependent India ′′ for the welfare of the people of the country, has distributed financial aid of around 4520 crore to the state of Karnataka.
4250 crore rupees for Karnataka co-operative sector in one lakh crore package of self-dependent India. Available in four years.
After Covid 19, KCC Bank distributed Rs 1200 crore to farmers from all kinds of loan scheme at very low interest rate. Among these, the farmer's agricultural equipment loan, agriculture, long-term and short-term loans are given.
30 proposals submitted by KCC Bank and already distributing loans to four proposals today. Only 1 % interest rate loan is being given. This is 4 % loan and 3 % subsidy is given by the central government.
Approximately 200 crore loan will be granted in KCC Bank's Dharwad, Gadag Haveri districts in the coming four years.
The Prime Minister of the country has given the highest priority to farmers and co-operative societies and asked the Secretary of the Primary Agricultural Cooperative Association of Hassan District to provide the facilities they need.
Hon'ble Co-operative Minister of Karnataka and Mysore District in-charge Minister Sri S T Somashekar, District in-charge Minister Shri Jagadish Shetter, Sri Arvind Bellad, Sri C M Nimbannavar, Sri Amrit Desai, Smt. Vijayalakshmi Patil and District Cooperative Banks and District Cooperative Banks of Belagavi Province Members of Milk Unions and Administration Board were present.