We expect countries not to comment on India's internal affairs, as they expect others to do. 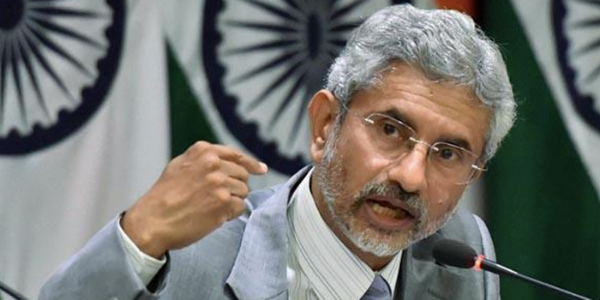 New Delhi: On Thursday, the Ministry of External Affairs blast out on China’s Remark and said “China has no authority to comment on India's internal affairs.” He mentions that the Union Territories of Jammu and Kashmir and Ladakh were, and will remain, integral parts of India. We expect countries not to comment on India's internal affairs, as they expect others to do.

China comment on the recent construction of new bridges in the border areas including Ladakh and the restlessness has increased due to construction.

“China, which has developed infrastructure in its border, is not digesting this from India.” The Chinese Foreign Ministry said on Tuesday that they oppose infrastructure development aimed at military oversight and control.

Chinese Foreign Ministry spokesman Lijian said in response to a question about the bridges built by India on the border, "Any party should take any step in the area that complicates the situation." China opposes any infrastructure development aimed at military oversight and control.

New Delhi: India may see the biggest investment in the Oil and natural gas sector around $206 billion during the next 8 to 10 years. The meeting of Prime Minister with top global executives on CERAWeek at India Energy Forum is expected to be in the talks of the further entice companies to promote
Posted Date :  26-10-20

New Delhi: Raksha Mantri Shri Rajnath Singh dedicated the 19.85 Km Alternate Alignment of the National Highway 310 from km 0.00 to km 19.350 to the nation. Necessitated due to the previous alignment having seen extensive damages due to sinking and other natural hazards, the road serves as an impo
Posted Date :  26-10-20

New Delhi: CMD RCF unveiled the plan for celebrating VAW2020 on the company’s website.  Keeping in view the Covid restrictions, activities like poster, quiz, webinars would be held on IT platform.  Quiz would also be held for dealers & farmers to increase their awareness.
Posted Date :  26-10-20

Neyveli: Shri Rakesh Kumar, CMD,Director (Power )and Director( Finance) of NLCIL visited NUPPL project,  Uttarpradesh to review the Project Progess from 21st -24th October.   During this visit they reviewed progress of the project with all Senior Executives,employees and interac
Posted Date :  26-10-20

New Delhi: Shri Kamal Singh - Director General of UN Compact Network died due to COVID.A Big loss to the entire Academic and Corporate Fraternity as he was very helping by Nature.   He has always been support for asian african chamber of commerce unified brainz WPDO world peace since
Posted Date :  26-10-20

New Delhi: Hon'ble PM Narendra Modi will be inaugurating the #CERAWeek today at 5:30 pm, where he will be interacting with the global Oil & Gas CEOs and experts. On October 26-28, 2020, thousands of delegates from Indian, regional, and international energy companies, institutions, and gov
Posted Date :  26-10-20

Gurugram: POWERGRID celebrates the 31st Raising Day in spirit of all employees and stakeholders who were part of more than three-decade journey of the Maharatna Company. The ceremony was held at Corporate Centre, Gurugram complying with all COVID-19 protocols and witnessed the presence
Posted Date :  26-10-20

Bilaspur: SECL is committed to providing excellent coal on time to all its coal consumers. The Aftech statistics for the month-September 2020 are describing the speed in this work. In September 2020, SECL had 10.40 million tonnes of coal offtech, while 8.39 million tonnes of Aftech last year
Posted Date :  24-10-20