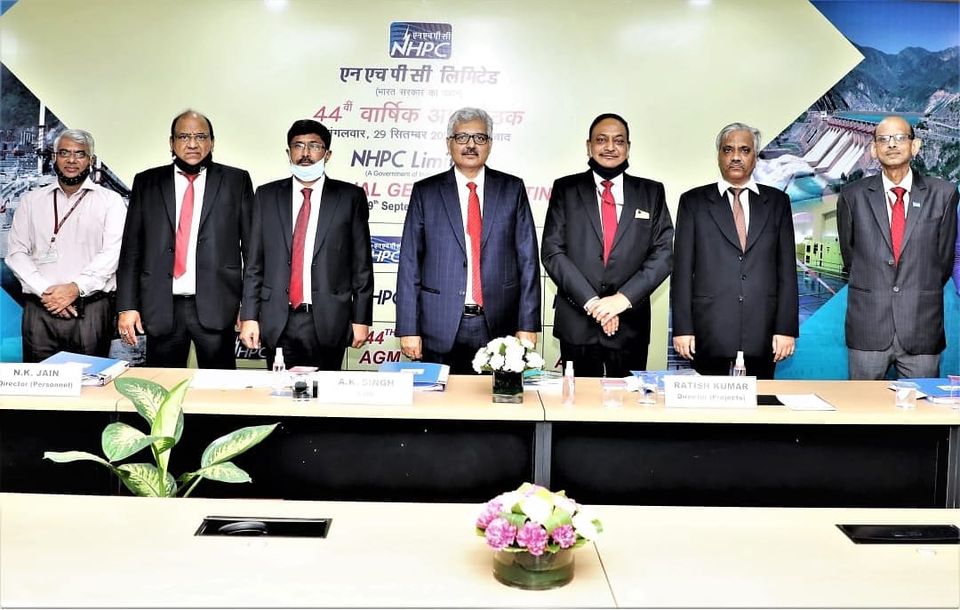 New Delhi: NHPC Limited, hosted its 44th Annual General Meeting (AGM) through video conferencing from its Corporate Office, Faridabad on 29th September 2020. The management of the company recommended a dividend of Rs.1.50 per equity share for the year 2019-20, which is inclusive of interim dividend of Rs.1.18 per equity share paid in March, 2020. Shri A.K. Singh, CMD, NHPC addressed the shareholders at the AGM wherein members of NHPC Board and Company Secretary, NHPC were also present. CMD highlighted key achievements made by NHPC despite the challenges posed due to CoVID-19 pandemic. Shri Singh informed that the Company had earned a total revenue of Rs. 9,771.59 crore, revenue from operations (net) of Rs. 8,735.41 crore and Net Profit After Tax (PAT) of Rs. 3,007.17 crore during the FY 2019-20.

He also said that NHPC had achieved its highest ever annual generation of 26,121 Million Units (MUs) surpassing the previous highest generation of 24,193 MUs during financial year 2018-19. Shri A.K. Singh further informed about the successful acquisition of Lanco Teesta Hydro Power Limited as a wholly owned subsidiary company for the implementation of Teesta VI HE Project(500 MW) in Sikkim through Corporate Insolvency Resolution Process (CIRP). Similarly, the company has been declared as successful resolution applicant by the Committee of Creditors of Jal Power Corporation Limited, a company implementing Rangit Stage-IV HE Project (120 MW) in Sikkim. The shareholders were also informed about the receipt of stage-II forest clearance for Dibang Multipurpose Project (2800 MW).
Shri Singh also informed about MoUs signed with Green Energy Development Corporation of Odisha Limited (GEDCOL) to form a Joint Venture Company (JVC) to plan & develop techno-commercially feasible floating solar power projects of 500 MW in the state of Odisha and with Hydroelectricity Investment and Development Company Limited (HIDCL), a company owned by Govt. of Nepal for joint cooperation to develop hydropower projects in Nepal. He went on to add that the company is having 2,800 MW installed capacity under construction and hydroelectric projects having 5,945 MW installed capacity are under clearance or approval stage.
Other important points during the address of Shri A.K. Singh, CMD included efforts to augment growth in solar and wind power. Company has envisaged floating solar projects of 500 MW each in Odisha and Telangana and 50 MW in Kerala under Ultra Mega Renewable Energy Power Parks (UMREPPs) Scheme of Ministry of New and Renewable Energy (MNRE), Government of India. Company has received in-principle approval from MNRE for enhancement of Solar Park capacity (from 100 MW to 140 MW) in Odisha, which envisages development of two projects of 40 MW and 100 MW. Possibilities are also being explored for development of other utility scale solar projects in different States/UTs such as Telangana (293 MW), Tamil Nadu (2 X 25 MW) and Leh (50 MW).
NHPC has issued Letter of Award (LOA) to solar power developers for Inter State Transmission System (ISTS) grid connected photovoltaic projects aggregating to 2,000 MW. NHPC is also undertaking various other projects with installed capacity of 2,258 MW through subsidiaries and joint ventures. He said that by the end of the current decade NHPC will have installed capacity of 20000 MW including JVs and Subsidiaries.Various queries of members regarding performance of the Company were also addressed at the AGM.

ONGC and Oil organized a webinar for chemical development