The Indian Railways has faced Rs 1,670 crore of loss since the farmers have started this protest and this is not the end, the farmer's organizations in Punjab are refusing to stop the agitation against the three central farm law passed by the parliament. 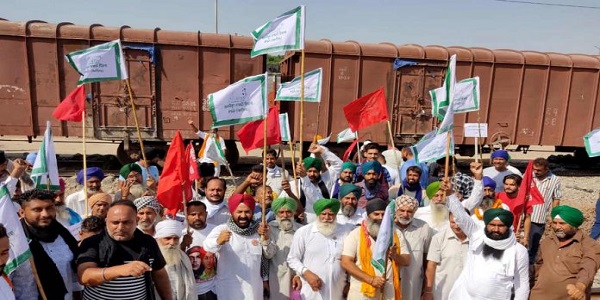 Punjab farmers protesting against the Modi government's farm laws in front of a goods train at Phillaur railway station (File photo: ANI)
New Delhi: Indian Railways showed that the heavy numbers of passengers faced an issue due to the ongoing protest by the Punjab farmers, around 1,987 passengers, 3,090 goods trains terminated due to this.
Official states that the Indian Railways has faced Rs 1,670 crore of loss since the farmers have started this protest and this is not the end, the farmer's organizations in Punjab are refusing to stop the agitation against the three central farm law passed by the parliament.
Railway ministry spokesperson D.J. Narain confirmed the numbers. “There are about 30-40 (passenger) trains being canceled daily,” he said. “As of now, according to our data, 1,987 passenger trains have been canceled due to the Punjab agitation… This is at a time when due to the festive season, the occupancy in passenger trains has been over 90 percent,” according to the print.
This whole incident shifts the freight customer's mode of transportation because of the cancellation of the trains which turns to be a loss for the railways.