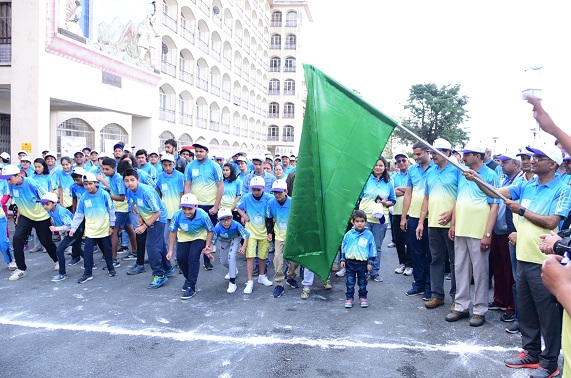 Shimla: Shri Nand Lal Sharma, Chairman & Managing Director, SJVN Limited along with Shri Amarjeet Singh Bindra, Director (Finance), Shri Rakesh Kumar Bansal, Director (Electrical), Smt. Geeta Kapoor, Director (Personnel) and Chief Vigilance Officer, Shri Shyam Singh Negi flagged off a mini-marathon to sensitize public about 'Save Energy Save Environment' from Himachal Pradesh Government, Secretariat Chotta Shimla. The marathon is part of various events being organized to commemorate 32nd Raising Day of SJVN, which was founded on 24th of June 1988 as a joint venture of Government of India and Government of Himachal Pradesh.
All the employees posted at Corporate Head Quarters, Shimla along with their family members participated in the marathon. The marathon which started from Chotta Shimla culminated at Hotel Peterhoff, where other fun games and cultural events on the same theme were also organized.
In the category of boys under 15 years, Anubhav Sharma bagged the first position while Bhanu and Abhimanyu Negi came second and third. In the same category for girls, Ishita Negi stood first while second and third positions were secured by Garima Gupta and Anahita Kapoor. In the category 15 to 55 women Aastha Sharma, Pardhi Gupta and Shruti Marwah bagged first second and third position, while in the same category for men Ved Prakash Sharma bagged the first position while Pushkar Sharma and Manish Chauhan were second and third.
In the category of veterans (above 55) Sukhdev Sharma bagged first place while second and third were bagged by Joginder Sharma and R.P. Guleria. While in the male category of personnel from HIMPESCO posted at SJVN Ashish secured the first position while second and third positions went to Jagat Ram and Amar Chand, while in female category Minakshi Goswami stood first while Shruti Shandil and Usha Devi bagged second and third positions. The first prize in all the categories was Rs. 5,000/- while second and third prize winners got Rs. 4,000/- & Rs. 3,000/- respectively. In addition to these, there were six consolation prizes of Rs. 1,000/- each in every category.
In the cultural event based on the theme 'Save Energy Save Environment,' the team from Finance department bagged the first prize of Rs. 25,000/-, second prize of Rs. 20,000/- went to team HR, while the third position with a prize amount of Rs. 15,000/- secured by the team of Civil Design Department.
The prizes were distributed by Chairman and Managing Director, Shri Nand Lal Sharma along with Directors and Chief Vigilance Officer.