The fourth submarine in the series of six submarines of Project-75, was commissioned on 25 Nov 21 in the presence of Admiral Karambir Singh, Chief of the Naval Staff. 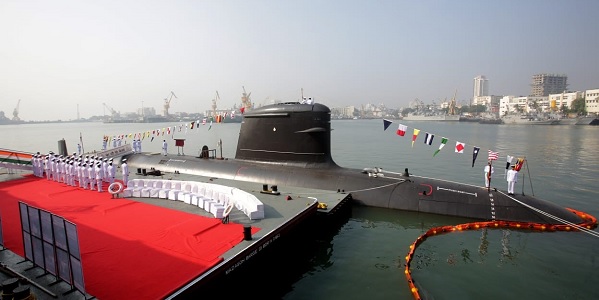 Another major milestone for Indian Navy’s Project 75 and Make in India initiative INS Vela would form part of the Western Naval Command The submarine has advanced stealth features and long range guided torpedoes as well as anti-ship missiles Mumbai: INS Vela, the fourth submarine in the series of six submarines of Project-75, was commissioned on 25 Nov 21 in the presence of Admiral Karambir Singh, Chief of the Naval Staff. The formal commissioning ceremony took place at the Naval Dockyard in Mumbai. The Scorpene Class submarines are being built in India by the Mazagon Dock Shipbuilders Limited (MDL) Mumbai, under collaboration with M/s Naval Group (earlier DCNS), France. The commissioning of the 4th in class submarine is a major milestone achieved today. INS Vela would form part of the Western Naval Command’s Submarine fleet and would be another potent part of its arsenal.

Member of Parliament Shri Arvind Sawant, Flag Officer Commanding-in-Chief, Western Naval Command Vice Admiral R Hari Kumar, Chairman & Managing Director, Mazagon Dock Shipbuilders Limited Vice Admiral Narayan Prasad (Retd) and other senior civil & military officials of Ministry of Defence were present during the commissioning ceremony of INS Vela. Crew of the erstwhile ‘Vela’, a Russian origin Foxtrot Class Submarine, which was decommissioned in 2009, were also present amongst the guests on this occasion. The Scorpene submarines are extremely potent platforms, they have advanced stealth features and are also equipped with both long range guided torpedoes as well as anti-ship missiles. These submarines have a state of the art SONAR and sensor suite permitting outstanding operational capabilities. They also have an advanced Permanent Magnetic Synchronous motor (PERMASYN) as its propulsion motor.       The delivery of Vela is yet another affirmation of the impetus being given by the Indian Navy towards consolidating its position as a ‘Builder’s Navy’ as also indicative of MDL’s capabilities as a premier ship and submarine building yard. The commissioning of the submarine is coinciding with ‘Azaadi ka Amrit Mahotsav’ and ‘Swarnim Vijay Varsh’ celebrations.