They had been controlled by various militias before falling into the hands of Haftar's forces who earlier this year agreed to lift a blockade of Libya's oil fields. 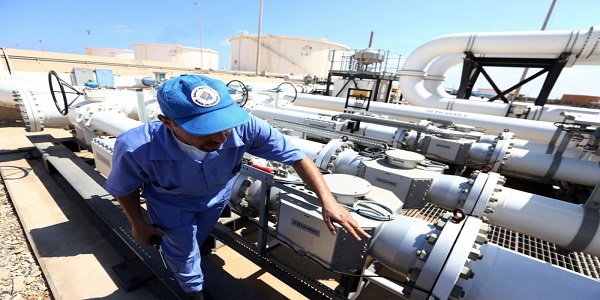 Libya's oil worker (AFP)
Tripoli: Libya's National Oil Corporation announced Friday the resumption of oil exports from two key terminals in the east of the conflict-strewn country, as rival administrations struck a ceasefire deal.
"Force majeure is being lifted from Ras Lanuf and Al-Sidra starting Friday," the state oil company said in a statement.
"The National Oil Corporation has received confirmations that the foreign forces had left the ports' area which will enable it to perform its oil operations and resume exports," it said.
Force majeure refers to external unforeseen elements that prevent a party from fulfilling a contract.
The North African state has been in chaos since a 2011 uprising that toppled and killed longtime dictator Moamer Kadhafi.
Libya, which sits atop Africa's largest proven crude oil reserves, has been torn between the rival powers of the UN-recognised Government of National Accord (GNA) in Tripoli and strongman Khalifa Haftar who backs a rival administration in the east.
The two warring factions Friday signed a "permanent ceasefire" after five days of talks at the United Nations in Geneva.
Ras Lanuf and Al-Sidra are among the conduits for much of the crude, gas and petrochemical sales that form the lifeblood of Libya's economy.
They had been controlled by various militias before falling into the hands of Haftar's forces who earlier this year agreed to lift a blockade of Libya's oil fields.