Also, Rs 1.75 crores to set up an oxygen generating plant at AIIMS, Bhopal 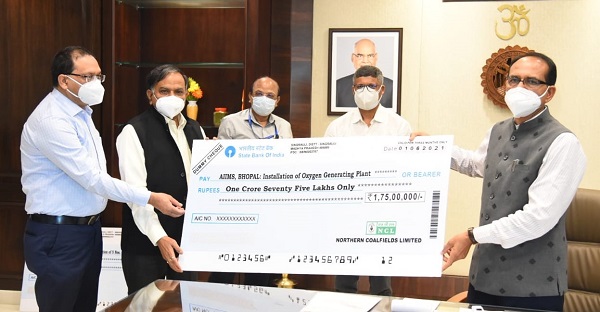 CMD of Northern Coalfields Limited Shri Prabhat Kumar Sinha met with Hon’ble Chief Minister of Madhya Pradesh State, Shri Shivraj Singh Chouhan
Madhya Pradesh: CMD of Northern Coalfields Limited, A flagship Coal India arm, Shri Prabhat Kumar Sinha met with Hon’ble Chief Minister of Madhya Pradesh State, Shri Shivraj Singh Chouhan on Friday, and handed over a Cheque of Rs 10 Crore to set up 5 oxygen plants in different medical colleges of state under its Corporate Social Responsibility (CSR). This initiative has been conceived by Chairman Coal India Shri Pramod Agrawal and continuous monitoring and support from his side immensely helped in the finalization of these projects well in time.
This will assist the state to strengthen the fight against COVID-19 in trying pandemic time. Director (Personnel), NCL Shri Bimlendu Kumar was also present during the meet held in Bhopal.
In the meet, CMD Shri Sinha apprised Hon’ble CM about NCL and its operation in the state. He briefed about the CSR activities of the company in the Singrauli Region and the Major Project being undertaken for the inclusive development of the region. CMD also detailed the measures taken by NCL to curb the COVID19 pandemic. He also urged the MP CM to start a Medical and Mining College in Singrauli.
The Hon'ble Chief Minister appreciated the contribution of NCL in the energy security of the Nation and NCL’s effort in fighting the COVID pandemic in induced testing time. He also assured his support to NCL.
The amount Rs10 Crore has been given to the Department of Public Health and Family welfare of the MP Government towards upgrading healthcare infrastructure in light of the COVID pandemic. Along with this, the company has also given the assistance of Rs 1.75 crores to set up an oxygen generating plant at AIIMS, Bhopal for the treatment of patients, under its CSR initiatives.
Apart from its own endeavors to tame down COVID, NCL is also assisting Singrauli district administration against COVID for up-gradation of medical infra such as oxygen plants and necessary arrangements with ? 7 Crore. Previously NCL had also contributed a sum of ? 20 Crore to the Madhya Pradesh government to fight against the COVID-19 pandemic.
NCL has also provided essential facilities to more than 1 lakh people living in the villages of the Singrauli region, such as sanitization of public places, distribution of ration kits, masks, sanitizers, medical kits, and medical equipment, etc.
Strong health infrastructure in a record time for the treatment of COVID patients was developed to serve the employees and locals.
Major CSR Projects of NCL running in Madhya Pradesh:
In the last 7 years, NCL has spent about Rs 500 crores in its CSR initiatives in the state of Madhya Pradesh. NCL has carried out the development of Major public infrastructure, improving connectivity through roads, water supply, skill development, health care, education, sports, promotion of art and culture.
In the last FY NCL spent about Rs130 Crore on its different CSR projects, giving new dimensions to sustainability including transform Singrauli
Being a responsible Corporate, in the previous year, NCL has given Rs. 1485 crore as royalty and Rs. 462 crore as a District Mineral Fund (DMF) to the state.
NCL is a Miniratna company of the Government of India, Mining more than 115 MT of coal annually from its 10 highly mechanized coal mines in which 6 opencast mines operating in MP produce about 85% of the company's coal.  NCL contributes about 15 percent in the total coal production, which thereby generates about 10 percent of the total electricity of the country.

New Delhi: REC Limited has committed financial assistance to the tune of Rs 4.99 crores through its CSR arm REC Foundation to The Leprosy Mission Hospital. As part of the project, Rs 42 lakh has been sanctioned for “Construction of Operation Theater complex in The Leprosy Mission
Posted Date :  31-07-21

Jharkhand: SAIL–Bokaro Steel Plant (SAIL-BSL) has provided 10 computers to the refurbished Computers Lab of “Bokaro Private ITI”, which was inaugurated on 29th July 2021. SAIL–BSL has provided these computers under its of Corporate Social Responsibility (CSR) scheme.
Posted Date :  31-07-21

Ahmedabad: Housing and Urban Development Corporation Ltd. (HUDCO) has provided two ambulances with ACLS facility to Civil Hospital Ahmedabad under its CSR initiative to facilitate emergency treatment of patients, while on way to Hospital.    The CSR grant of Rs 70 lakh was provided t
Posted Date :  10-07-21

SECL to assist 83 schools in Chhattisgarh

Chhattisgarh: In a new CSR initiative, the Raigarh region of South Eastern Coalfields Ltd. will be extending financial assistance of Rs. 276 lakhs towards the introduction of smart classes in 83 Government schools of Raigarh, Dharamjaigarh, and Kharsia in Chhattisgarh.    Teachers wi
Posted Date :  09-07-21

Oil India contributes 500 Oxygen Concentrators to the Govt of Assam

Noida: Oil India Limited (OIL), a fully integrated National petroleum E&P company in the upstream sector in India contributed 500 Oxygen Concentrators to the Government of Assam. In many ways OIL have been extending its support, as part of CSR, to the State’s fight against COVID-19; others
Posted Date :  07-07-21

Singrauli: Northern Coalfields Ltd. in a new CSR initiative is training 480 local youth in various trades like Mine Electrician, Mine Welder, Data Entry Operator and HEMM Mechanic in association with the Skill Council for Mining Sector (SCMS) at Mining Skill Center in CETI premises, to open up emplo
Posted Date :  07-07-21