The signing of PSA/PPA for 2000 MW solar power shall ensure the commissioning of these projects by march 2022 thus contributing to the ambitious target of the govt. of India for the development of 100 GW of solar energy by 2022. 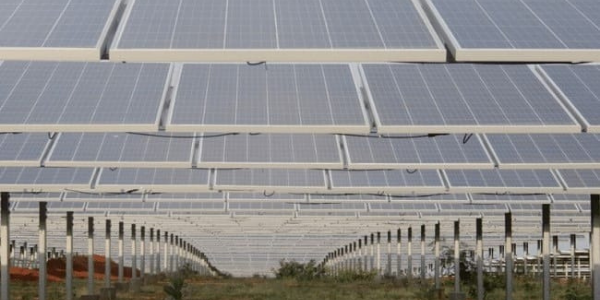 New Delhi: NHPC has successfully completed the signing of PSA/PPA with Discoms/SPDs under the leadership and guidance of Shri A.K Singh CMD of NHPC on October 20, 2020, on back to back basis for entire 2000 MW solar power as an intermediary procure. The signing of PSA/PPA for 2000 MW solar power shall ensure the commissioning of these projects by march 2022 thus contributing to the ambitious target of the govt. of India for the development of 100 GW of solar energy by 2022.

National Hydroelectric Power Corporation Limited (NHPC) is an Indian Hydropower generation company that was incorporated in the year 1975 with an authorized capital of Rs. 2000 million and with an objective to plan, promote and organize an integrated and efficient development of hydroelectric power in all aspects. Later on, NHPC expanded its objects to include other sources of energy like Solar, Geothermal, Tidal, Wind etc.

CMD, Shri Abhay Kumar Singh had a vast experinece not only in the areas of Civil but also Hydro-Mechanical. He started his professional journey in 1985 with joining NHPC at Tanakpur HE Project (120 MW) as Probationary Executive. His persistent learning attitude coupled with the ability to multitask, resulted in he taking up various responsibilities of the project at a very early stage.

With his strategic thinking mindset, fact-based result oriented decision-making, he is not only able to utilise the available resources to the fullest but also is able to achieve targets ahead of schedule. In his 35 years of professional life, he has played pivotal roles in the setup of many Hydroelectric projects like Tanakpur Project (120 MW), Dhauliganga Project (280 MW), Teesta low dam stage IV (160 MW), Parbati Stage II (800 MW), Parbati Stage III (520 MW) and Kishanganga HE Project (330 MW) with responsibilities ranging from construction management of key project components to the Head of the Project (HoP) and Regional Head roles.

New Delhi: Central Electronics Limited (CEL) and Delhi Metro Rail Corporation (DMRC) joined hands and come together to do various developing changes and initiatives under the "Make In India" initiative.    The Memorandum of Understanding was signed by the Chairman and
Posted Date :  27-11-20

New Delhi: REC Limited has partnered with the Confederation of Indian Industry (CII) – One of the largest Industry Associations in India, to provide industry-aligned, job oriented skill training and employment to 1500 youths from the economically weaker section of the society under their co
Posted Date :  25-11-20

FICCI UP State Council signed an MOU with AFL

Uttar Pradesh: FICCI UP State Council signed an MOU with Alliance française de Lucknow (hereinafter called AFL) in the presence of the French Ambassador to India to encourage, promote and facilitate the promotion of French Culture, Traditions and Language, especially amongst the business c
Posted Date :  26-11-20

New Delhi: Indian Oil R&D Centre has developed robust technology on Bio-methanation and has signed MoU with the Ministry of Petroleum and Natural Gas, Government of India as a technology provider for the upcoming CBG Plants.   Production of CBG would increase the green energ
Posted Date :  20-11-20

Mumbai: IREL (India) Limited, a CPSE under Department of Atomic Energy, the largest producer of Ilmenite in India and Ust-Kamenogorsk Titanium and Magnesium Plant (UKTMP JSC) Kazakhstan, one of the big producers of Titanium Sponge and Metal signed a Memorandum of Undertaking (MoU), for production
Posted Date :  20-11-20

NCL Khadia made a MOU worth Rs 4312 lakh

Sambalpur: MCL entered into a Memorandum of Agreement with CIPET Bhubaneswar for providing 6-months residential training to the 24 youth from the operational areas of MCL under its CSR project ‘Handyman’. The MoU has been jointly signed by General Manager (CSR) MCL and Dy Director/Hea
Posted Date :  17-11-20

New Delhi: Energy Efficiency Services Limited (EESL), a joint venture of PSUs under the Ministry of Power and Department of New & Renewable Energy (DNRE), Goa, have signed a memorandum of understanding today to discuss rolling out of India’s first Convergence Project in the State. The M
Posted Date :  17-11-20

HSCL- a Subsidiary of NBCC Signed MoU with NESTS

PDIL signed MoU with the Department of Fertilizers