The fund will also be utilized for the promotion of Boxing, Women Hockey and Athletics to be targeted and any other sports, as may be mutually agreed by REC and NSDF. 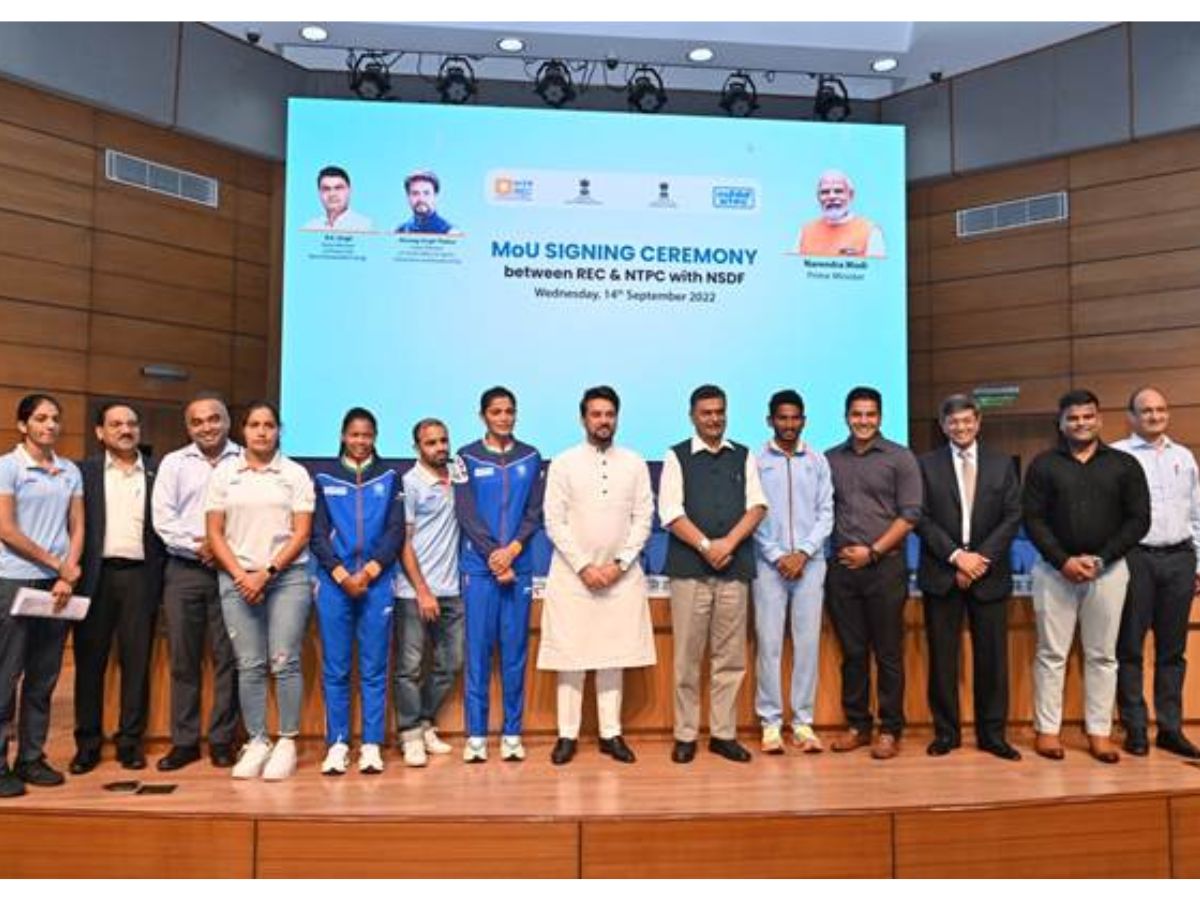 New Delhi: In a historic event, two major PSUs NTPC and REC Ltd under the Ministry of Power signed a Memorandum of Understanding (MoU) today with the National Sports Development Funds (NSDF) and Ministry of Youth Affairs and Sports (MYAS) with National Sports Development Fund. MoUs were signed in the presence of Shri R.K Singh, Union Minister of Power and New & Renewable Energy and Shri Anurag Singh Thakur, Union Minister of Youth Affairs & Sports and Information and Broadcasting were present during the historic MoU signing ceremony.

REC committed Rs 100 Crores for 3 years towards Women's hockey, Boxing, and athletics. The Company has allocated Rs 100 crore to be spent in three years as an Amount of Assistance for its CSR initiative.

However, Rs. 215 Crores. Rs 115 crores commitment is for 5 years by NTPC towards Archery.

Shri R.K Singh congratulated both PSUs for their humongous efforts in promoting sports in India by committing Rs. 215 Crores. Rs 115 crores commitment is for 5 years by NTPC towards Archery and

Shri Singh highlighted that Sports is an integral part of character building and nation building. He stated that for the development of the country, sports have to be promoted as many other developed countries have been doing. He reiterated the call by the Hon’ble Prime Minister for the promotion of sports in the country and shared that there is a huge increase in the number of medals being won by India in different sports in various international events including Olympics. Shri Singh added that we have to encourage and support the talent in sports, increase the number of coaches and develop world-class facilities.

Power Minister further expressed that many other Power PSUs would also come forward to financially support various other sports. He urged  Power PSUs to come forward in providing employment not just to successful athletes but also to other athletes who need support. He concluded by wishing all the athletes for upcoming Olympics to win big and make the country proud.

Speaking on the occasion Shri Anurag Thakur said that two PSUs from the Power Ministry have contributed a total of Rs 215 crore for the development of sports, making it a historic occasion. This contribution by the Power Ministry will go a long way to energise the sports sector, he said. "Everyone, from the corporates to individuals and from various institutions to States, should work together as a team. This MoU signing will give a big motivation to our athletes .”, Shri Thakur added. "Earlier, I had urged online donations at NSDF, to adopt an athlete, a sport and an academy. Now, both NTPC and REC have adopted both sports and athletes. This has all happened because of the vision of the Prime Minister of India Shri Narendra Modi. There are many PSUs but the ones who come forward help in building soft power of India, help athletes keep away from addiction, and also motivate them to perform higher at the international stage," added Shri Thakur.

REC has initiated assistance for “Broad basing of Sports and promotion of excellence in sports in India” to be implemented by National Sports Development Fund (NSDF), under Ministry of Youth Affairs and Sports with an aim to promote sports in general and specific sports disciplines and individual sportspersons in particular for achieving excellence at the national and international level.

The fund will be utilized for activities and work permissible for expenditure as a support to Target Olympic Podium Scheme (TOPS) athletes, support for coaches and other support staff and also for any other projects, programmes or events for broad basing of sports and promotion of excellence in sports in India. The fund will also be utilized for the promotion of Boxing, Women Hockey and Athletics to be targeted and any other sports, as may be mutually agreed by REC and NSDF.

NTPC has been supporting the Archery sport in partnership with the Ministry of Youth Affairs and Sports, Sports Authority of India (SAI) and Archery Association of India (AAI) with an aim to provide world class facilities with international exposure & platform to the talented pool of Archers of India.

Under its CSR initiative, NTPC has committed Rs. 115 Crore in 5 years for development of Archery Sports. Out of total 115 Crore, Rs. 15 crore will be incurred as a one-time expenditure towards preparations of field targets, setting up of training centres and equipment like bow & arrow. Further, remaining Rs. 100 crore will be incurred as recurring expenditure in 5 years (Rs. 20 crore per year) towards the development of Archery from the grassroot level, training of identified talents, training of elite talents, development of high-performing coaches, procurement of FOP equipment, development sports & science lab compatible for Archery, Scholarships/ prize money for high performers, advance training/ competitive exposure/ foreign training & exposure to Sub-Jr./ Jr. Archers of Recurve and Compound Archers including Para Archers, etc.