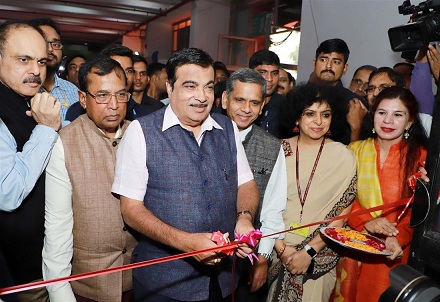 NEW DELHI. The Union Minister for Road Transport & Highways and Micro, Small & Medium Enterprises, Shri Nitin Gadkari inaugurating the 39th edition of the India International Trade Fair (IITF), at Pragati Maidan, in New Delhi on November 14, 2019. The Minister of State for Commerce and Industry, Shri Som Parkash and the Secretary, MSME, Shri Arun Kumar Panda are also seen.
Union Minister of Road Transport & Highways and MSME Shri Nitin Gadkari, inaugurated the 39th India International Trade Fair(IITF) here yesterday . The theme for this edition of the Fair is “Ease of Doing Business” inspired by the unique achievement of India of rising up to the 63rd rank on the World Bank’s Ease of Doing Business Index from 142nd rank in year 2014.
Addressing the gathering on the occasion, Shri Gadkari said, the country has made good progress in the field of MSMEs. He said, MSMEs contribute up to 29 per cent of India’s total exports. The sector has generated employment to over a crore people recently. The Minister described the MSME sector as the growth engine for India’s development.

New Delhi: As part of the activities under the Swachhata Pakhwada Campaign, face masks, sanitizers, soaps and other PPEs were distributed among ‘Safai Sathis’ by NRL.
Posted Date :  04-07-20

New Delhi: Shri. Shivendra Singh, Manager (Personnel), SECL was felicitated for his erudite contribution in preparing CIL's Executive HR Manual. He has been honored with The Certificate of Appreciation by Shri. Pramod Agrawal, Chairman, Coal India Limited. On 03.07.2020, Once again, Shri.
Posted Date :  04-07-20

New Delhi: Together with Hon’ble Speaker of Lok Sabha Shri Om Birla ji reviewed the progress of City Gas Distribution projects being implemented by PSUs of Ministry of Petroleum and Natural Gas, Government of India in Kota. RSGL, a JV of RSPCL and Gail Gas Ltd. has committed to supply 10,00
Posted Date :  03-07-20

New Delhi: SAIL, Rourkela Steel Plant (RSP) has set a national record by clocking 48 blows in a single day in a single converter of Steel Melting Shop-2 on 2nd July. The feat was possible because of perfect coordination and tremendous contribution by different departments. Hot Metal of requisite
Posted Date :  03-07-20

New Delhi: Addressed a Ministerial Webinar organised by International Solar Alliance and the Joint United Nations Programme on HIV/AIDS. The event focussed on building a robust health infrastructure through innovative applications of Solar energy. Discussed strategies to build a resilient he
Posted Date :  03-07-20

Dhanbad: As part of the 'Digital India' initiative, BCCL is all set to implement 'Hospital Management System' at Central Hospital Dhanbad and Regional Hospital Baghmara by 2021. Online technical training of HMS core functional team is currently being held from 2nd to 4th July'
Posted Date :  03-07-20

CIL chairman appealed employees on strike to go back to work

New Delhi: CIL chairman Shri Pramod Agrawal appeales employees on strike to go back. In the appeal he said that you are aware that Central Trade Unions have called for Strike in Coal Sector from 2nd to 4th July 2020. Some of you have expressed your perceived cause of concern, over commercial mini
Posted Date :  03-07-20

New Delhi: Steel Authority of India Limited (SAIL) has achieved the highest ever June month sales during June’20. The domestic and export sales stood at 12.77 Lakh Tonnes which is a jump of more than 18% over the Corresponding Period Last Year (CPLY). In June’20, the Company has also recorded
Posted Date :  03-07-20

Neyveli: NLC India announced on 01 July 2020 that at around 9.45 Hrs. in Unit V of Thermal Power Station-II, (TPS-II), Neyveli, while it was under shut down and maintenance activities carried on, a fire broke out in the boiler area subsequent to an explosion, resulting in injuries to the NLCIL ma
Posted Date :  03-07-20

Rachi: Workers of Coal India Limited (CIL) started a three-day strike against the privatisation of the company on Thursday. The workers raised slogans against the e-auction of coal blocks to private parties. Five labour unions are leading the strike and have halted mining and production activ
Posted Date :  03-07-20

Singrauli: NCL organized a webinar on ‘COVID 19 and the precautions to be taken to deal with the pandemic’ on Wednesday. CMD and Functional Directors of NCL attended the webinar addressed by Dr. Rajeev Rathi, Director, and Head of the Trans-Radial Interventional Program at Max Hospital Saket
Posted Date :  02-07-20

New Delhi: Swachhta Pledge administered today at EIL HO, EIL Gurugram Complex, ROs, BO, RPOs and Site Offices Swachhta Pakhwada 2020.Engineers India Limited (EIL) is a Navratna public-sector undertaking of the Government of India under the Ministry of Petroleum and Natural Gas. It was set up in
Posted Date :  02-07-20

Kolkata: BPCL staff in Kolkata take the Swachhta Pledge yesterday, in this video, to mark the beginning of Swachhta Pakhwada in the country. The pledge and other activities during this fortnight are aimed to educate everyone and to bring qualitative improvements, related with cleanliness, in our
Posted Date :  02-07-20