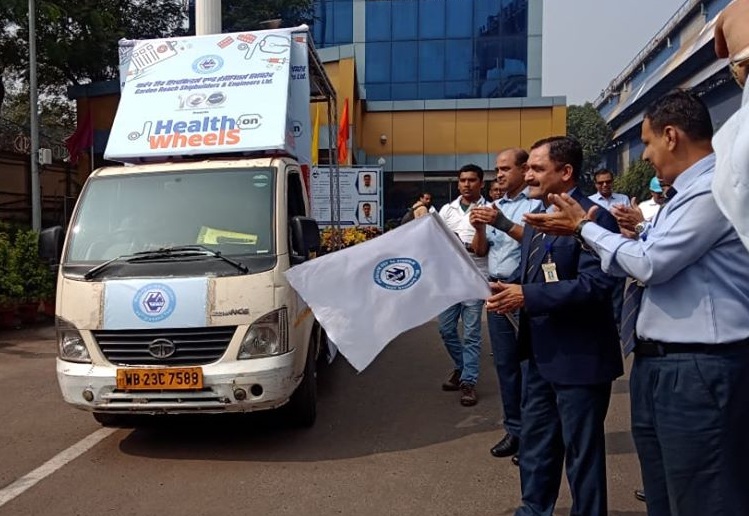 Kolkata: Garden Reach Shipbuilders and Engineers Limited (GRSE) had taken the unique initiative of organizing a Mobile Health Camp to cater to the basic health care facilities in the community. The Camp also aimed to create awareness of healthcare and hygiene among households, which included students, youth, men and women in under-privileged areas of Kolkata where access to primary healthcare is not easily available.
Cmde. Sanjeev Nayyar, IN (Retd), Director (Shipbuilding) of GRSE flagged off the “Health on Wheels” initiative from the Shipyard’s Main Unit. Under this initiative, a Mobile Unit travelled across to four areas of Kolkata. The unit was manned by two doctors, a compounder and an attendant encouraging people for undergoing health check up. The Mobile Unit provided free health checkups which included height, body weight (BMI), Blood Pressure and Sugar tests. Close to 142 people were provided the facility across four areas of Kolkata which included Kalighat, Tollygunge, Ultadanga and Duttabad areas.
The “Health on Wheels” initiative is part of GRSE’s on-going commitment to enhance the lives of the communities it operates in. The Shipyard had recently organized a ‘Swachhta Sarthi Bike Rally’ to create awareness about cleanliness and healthy lifestyle amongst people in Kolkata. GRSE has also partnered with Ramakrishna Mission, Belur Math to provide holistic development of under-privileged children in Ranchi. GRSE has a long association with Indian Institute of Cerebral Palsy (IICP) wherein it has been adopting Education Development Units and Vocational Training Units called Life Skill Training Units.

Jharkhand: As a part of the ongoing Awareness campaign on the fight against COVID the CSR teams of Metallurgical & Engineering Consultants Limited (MECON) which is a Public sector undertaking under the Ministry of Steel of the Government of India, distributed masks and soap in Pancha and Sung
Posted Date :  23-10-20

New Delhi: New Delhi: Balmer Lawrie is dedicated to Fight Against Corona and distributed a total of 1500 masks to the children and their parents in Saily and Khadoli Village, Silvassa.   The children and parents have been sensitized about the methods of wearing masks, maintaining soc
Posted Date :  19-10-20

CMPDI Bilaspur distributed anti-septic bottles and soaps to the people

Kokrajhar: NTPC Bongaigaon has always been on forefront of community development of nearby villages and under the aegis of CSR-CD programme, the power station today (26th September, 2020) donated a community toilet at Salakati Market, Kokrajhar. The community toilet was inaugurated by Shri Ra
Posted Date :  26-09-20