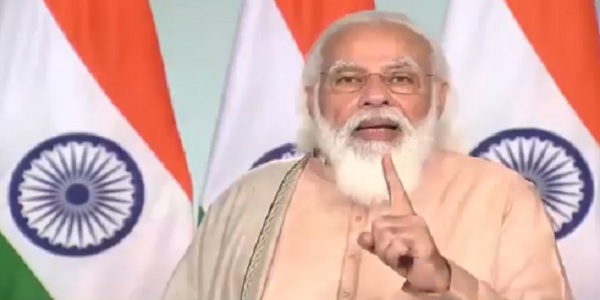 Prime Minister of India (PSU Connect)
New Delhi: The Prime Minister, Shri Narendra Modi delivered the inaugural address at FICCI’s 93rd Annual General Meeting and Annual Convention today via video conferencing. The Prime Minister complimented the Indian private sector for not only meeting the domestic needs but also for its capability to establish a strong brand India globally. The commitment of every citizen towards Aatmnirbhar Bharat is an example of the country’s faith in its private sector, he said.
The Prime Minister said that in life as well as governance, a confident person never hesitates in giving space to others. A strong government, backed by a massive mandate exudes that confidence and dedication. A decisive government always strives to remove obstacles for others and always tries to contribute towards society and the nation. Such a government doesn’t want to hog the control and initiative.
He recalled the time when the government was in all the sectors and described the ruin brought about by this approach on the economy.  A visionary and decisive government, on the other hand, encourages all the stakeholders to realize their potential. Shri Modi pointed out that in the last six years, the government is encouraging stakeholders in all sectors. This is reflected in the all-around reforms in sectors ranging from manufacturing to MSME; agriculture to infrastructure; from the tech industry to taxation and from real estate to regulatory easing, he added.
The Prime Minister told the gathering that our industry needs bridges, not walls. By removing the walls separating various sectors of the economy there will be new opportunities for everyone, especially the farmers who will get new options. Investment in technology, cold storage, and the agri-sector will benefit farmers. The Prime Minister called for investing energy in finding ways to make agriculture, service, manufacturing, and social sectors complement each other. An organization like FICCI can be both a bridge and an inspiration in this endeavor. We should work with a goal to strengthen the local value and supply chain and how to expand India’s role in the global supply chain. “India has a market, manpower and also the capability to work in mission mode”,  Shri Modi said.
The Prime Minister cited the success of financial inclusion through the trinity of J-A-M (Jan-Dhan, Aadhar, and Mobile) as the best example of a planned and integrated approach to reform under this Government. This, the world’s largest Direct Benefit Transfer system, came in for praise when the country could transfer money in the crores of accounts through a click of a button during the pandemic time.
The Prime Minister dwelled on the steps to help the farmers and the agri-sector at length. Shri Modi said, “through policy and intention (nitiaurniyat), the Government is committed to the welfare of the farmers. Noting the increasing vibrancy of the agri-sector, Shri Modi talked of new alternatives available to the farmers to sell their produce outside the mandis, modernization of mandis, and the option of selling produce on an electronic platform. All this is directed to make the farmer prosperous as a prosperous farmer means prosperous nation, he said.
Shri Modi pointed out that private sector investment in agriculture is not up to the mark. He said in the fields of the supply chain, cold storage, and areas like fertilizers, etc, both interest and investment of the private sector is needed. There is a huge scope in rural agro-based industries and a friendly policy regime is in place for that, Shri Modi added.
Making a strong pitch for the positive change happening in the rural, semi-rural and tier-2, and tier-3 cities, the Prime Minister invited the senior business and industry leaders to take benefit of the opportunities in such areas. He informed that the number of Internet users in rural areas has surpassed the cities and more than half of India’s start-ups are in tier-2 and tier-3  cities. Mentioning recently approved PM-WANI for public Wi-Fi hotspots, he said that entrepreneurs should become partners in the rural connectivity efforts. “It is certain that in the 21st century, India’s growth will be driven by villages and the small cities and entrepreneurs like you should not lose out on the opportunity to invest in the villages and small cities. Your investment will open new doors for our brothers and sisters in the rural areas and the agriculture sector” said the Prime Minister.
The Prime Minister complimented the Industrialists and entrepreneurs for their contribution to the robust rebound from the Covid shock. He said that the country prioritized the lives of the citizens during the pandemic and that yielded good results. The circumstances improved with the same speed as they deteriorated initially, Shri Modi said.
Recalling FICCI’s role in the freedom struggle and their upcoming centenary in not so distant future, the Prime Minister asked to expand their role in the nation-building.

New Delhi: Speaking on the stronger financial system, and banking reforms Prime Minister of India points out the banking financial sector said Our top priority is to ensure that the depositor as well as the investor experiences trust and transparency. The old ways and old systems of banking and non-
Posted Date :  27-02-21

Not possible to remain the owner of many CPSEs, should focus on public welfare: PM Modi

New Delhi: Coming Back on the privatisation process, Prime Minister Shri Narendra Modi on Wednesday address the webinar on privatization and asset monetization, attended by the top investor bankers, sovereign and pension funds as well as domestic and international investors. Prime Minister is now
Posted Date :  26-02-21

New Delhi: Prime Minister Shri Narendra Modi dedicates to the nation & lay the foundation stone of multiple infrastructure projects worth over Rs 12400 crores in Puducherry and Tamil Nadu, the Union housing and urban affairs ministry said on Thursday, ahead of the Prime Minister’s vis
Posted Date :  25-02-21

New Delhi: Prime Minister Shri Narendra Modi addressed a webinar on the effective implementation of Budget provisions in DIPAM today through a video conference. Addressing the webinar, the Prime Minister said this budget has put forward a clear roadmap to take India back to the high growth trajec
Posted Date :  24-02-21

New Delhi: Prime Minister of India on Wednesday speaks after opposition parties criticised BJP on price hike on petrol for the ninth consecutive day. Petrol price hits Rs 100 per ltr for the first time in the country.    Speaking on this, PM said, that the middle class would not ha
Posted Date :  18-02-21

New Delhi: Prime Minister Shri Narendra Modi will address the NASSCOM Technology and Leadership Forum (NTLF) on 17th February 2021 at 12:30 PM via video conferencing. About NTLF The 29th edition of NTLF is being organised from 17th to 19th February 2021. It is the flagship event of the Nationa
Posted Date :  16-02-21

Work is underway to make India a hub for sea-food exports: PM at projects launch in Kochi