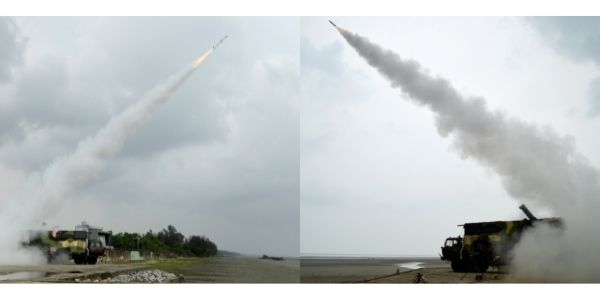 New Delhi: Defence Research & Development Organisation (DRDO) successfully flight-tested the New Generation Akash Missile (Akash-NG), a surface-to-air Missile from Integrated Test Range (ITR) off the coast of Odisha on July 21, 2021. The flight trial was conducted at around 12:45 PM from a land-based platform with all weapon system elements such as Multifunction Radar, Command, Control & Communication System, and launcher participating in the deployment configuration.

The missile system has been developed by Defence Research & Development Laboratory (DRDL), Hyderabad in collaboration with other DRDO laboratories. The launch was witnessed by the representatives of the Indian Air Force. In order to capture flight data, ITR deployed a number of Range stations like Electro-Optical Tracking System, Radar, and Telemetry. The flawless performance of the entire weapon system has been confirmed by complete flight data captured by these systems. During the test, the missile demonstrated the high manoeuvrability required for neutralising fast and agile aerial threats.

Once deployed, the Akash-NG weapon system will prove to be a force multiplier for the air defence capability of the Indian Air Force. Production agencies Bharat Electronics Limited (BEL) and Bharat Dynamics Limited (BDL) also participated in the trials.

Raksha Mantri Shri Rajnath Singh has congratulated DRDO, BDL, BEL, Indian Air Force, and the Industry for the successful test. Secretary Department of Defence R&D and Chairman DRDO applauded the efforts of the team and said the missile will strengthen the Indian Air Force.

New Delhi: Mr. Ravi Pratap Singh, Executive Director (HSSE), superannuates today after more than 36  years of exemplary service. During his journey with BPCL, he headed the Engg. & Projects and later HSSE.  He was instrumental in leading his team for the construction of cryogenic LPG i
Posted Date :  31-07-21

Himachal Pradesh: Border Roads Organisation (BRO) is carrying out rescue & relief operations in Himachal Pradesh that is witnessing flash floods and landslides due to heavy rainfall. In the Lahaul & Spiti Valley, the strategic Manali - Sarchu road was closed for traffic at various
Posted Date :  31-07-21

New Delhi: Bharat Electronics Limited (BEL), a Navratna Defence PSU under the Ministry of Defence, Government of India, conducted a Technical Session on Vendor Development during the “Indigenization Summit on Defence & Aerospace (ISDA-2021). The summit is being organized by the Confeder
Posted Date :  31-07-21

New Delhi: Mr.  N. Vijayagopal, Director (Finance) superannuates today after an illustrious and distinguished career lasting more than 34 years, which started from Kochi Refinery.   BPCL mentioned, "We thank him for carrying the financial batten of a company in its most challeng
Posted Date :  31-07-21

Use of AI for System driven energy accounting and extensive use of IT for Modernization of DISCOMS: Power Minister